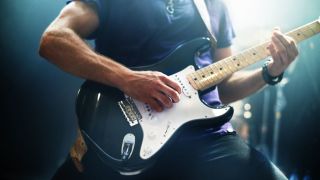 It’s World Guitar Day today, [](http://teamrock.com/news/2017-10-06/world-guitar-day-2017-deep-purples-smoke-on-the-water-tops-greatest-riffs-poll)and Deep Purple’s Smoke On The Water has been voted the greatest riff of all time by tens of thousands of music fans from across the world. It’s a classic riff for sure, and everyone knows it. Even your gran knows it. Your gran can probably play it! And while the top 100 results include some of iconic metal riffs (The Trooper, Raining Blood, Bulls On Parade), there are some killer riffs we feel have been under represented.

So here are five absolute barnstorming riffs that we consider severely underrated and should have made it into the list alongside Metallica, Sabbath and AC/DC.

John Petrucci (guitar): “When we released Pull Me Under, it was almost like a fluke amongst the early to mid-90s grunge movement where I think the whole space for guitar solos had been kinda forgotten about. But somehow that song broke through! I would say it was the song and album that launched our career in many ways and became the catalyst for us taking our next steps, like international touring. That opening guitar riff was actually one of those organically instinctual things that just popped out. I was playing my guitar and the notes just came to me. That doesn’t happen very often, so when it does it’s very cool! And it’s pretty simple, too; just three notes at a time. I guess it’s the song we are most known for and the one that really started things for us.”

Matt Tuck (vocals/guitar): “We wrote that riff before we were even actually signed. I remember coming up with the melody first, which was inspired by The Exorcist theme. It’s one of the simplest songs we’ve ever written, but it represents where we were at that point. Did we have any idea it’d launch us as a band? No, not at all. It was just a big-sounding riff, and that was all we were aiming for.”

Emperor – I Am The Black Wizards (In the Nightside Eclipse, 1994)

Ihsahn (vocals/guitar): “In the early Emperor years we would typically write songs at rehearsals by jamming on and combining riffs that either me or Samoth had come up with at home. During these jams, sometimes to the great frustration of my bandmates, I would get an idea in my head, stop the jam and start trying to work it out on the guitar. The main riff for I Am The Black Wizards is a typical example of this. Samoth came up with the rhythm part (that is now the intro to the song) and I worked out the melody line. Really, it’s just two simple powerchords and a quarter-note melody. We usually don’t talk about hooks in metal, but this tune makes people even sing along. The main theme also works as an intro, fast main verse and slow ending, so you could almost believe it was intended as a hook, but it was just coincidence!”

Robb Flynn (vocals/guitar): “I remember writing that riff at my wife Genevra’s apartment – she was my girlfriend back then – on my cheap classical guitar. I could hear it all in my head: how I wanted the beat to go and everything else. I think Logan [Mader, original Machine Head guitarist] added some things to it as well. It’s all a little hazy now! The harmonics came from when I was a kid, trying to play Celtic Frost songs on this shitty four-inch practice amp. I was trying to reproduce the feedback on those records but the amp wouldn’t even distort, let alone feed back, so I’d play a harmonic instead because that’s what I thought feedback was! We ended up using that in a bunch of songs on Burn My Eyes and now it’s a trademark for Machine Head. There’s a lot of heavy riffs in that song, dude.”

Trivium – Pull Harder On The Strings Of Your Martyr (Ascendency, 2005)

Matt Heafy (vocals/guitar): “When I wrote that riff, I was just sitting on my couch messing around. I wasn’t even trying to write anything, but it just came out of me and it sounded pretty cool, so the next day at practice, I said to Travis [Smith, former Trivium drummer], ‘Hey I’ve got this riff,’ and he had been playing the exact drum part the night before, totally without us interacting. So those two parts just fit in together. Which was pretty spooky. It’s become a really important part of our set, especially in the UK. You can feel the excitement in the crowd when that drum pattern starts and we often get people singing the actual riff back to us. That gets the hairs standing up on the back of your neck. You know you’ve written a good riff when they are singing the guitar part instead of the vocal. It’s an integral part of our arsenal.”

Follow all the World Guitar Day action on social media with the hashtags #WGD17 and #WorldGuitarDay.

World Guitar Day 2017: Everything you need to know!

The Greatest Guitar Riffs Of All Time – Revealed!