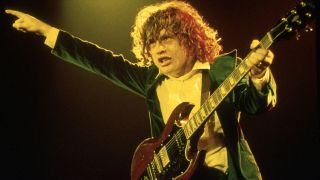 The title track from one of the biggest-selling albums in history, it’s safe to say that pretty much everyone knows (and loves) Back In Black by AC/DC. Even if you don’t think you know it, you know it. It stands alongside a handful of other roaring ‘80s rock tracks as guaranteed chaos when played at your local rock club, because that’s what AC/DC do best. You want a riff? They can give you a riff. And Back In Black is the riffiest of the lot.

If you need a little convincing, though, here’s the story behind that riff.

There are rock songs that appeal to metal fans. And there are metal songs that appeal to rock fans. Then there is Back In Black – a rock and metal song that appeals to everybody, from dads to dudes, to little old ladies beating noisy kids over the heads with their sticks – and it all hangs on that monumental, no-nonsense, three-chord monster of a riff.

Some say it has even been known to raise the dead. Or, as that lifelong AC/DC aficionado Slash once said: “Man, Back In Black would make a dead man come!”

Seriously though, have you heard that motherfucker? That monumental, tank-like riff booming like a giant robot lumbering towards you across a dark, lightning-forked horizon. That voice, like Godzilla gargling with rusty nails. Those drums, like hammers pounding into your frontal lobe. Case closed, right?

And yet it so nearly didn’t happen.

Conceived before the rest of the album that was eventually named after it, Back In Black was what happened when AC/DC auditioned Brian Johnson, the guy who would replace the recently-deceased Bon Scott.

He recalled: “They said, ‘We got this one song, we got a riff and we’re gonna call it Back In Black, but that’s all we’ve got. It’s a tribute to Bon. But we haven’t gotten any words and all we’ve got is… [humming the now famous, grenade-throwing riff].’

“That’s all it was. I went, ‘That’s it?’ And they said, ‘Yeah, well. Could you sing the words ‘back in black’?’” Grabbing the mic, Johnno waited for them to count in and begin playing the riff again, then just started screaming. You know by now what came out.

The Young brothers, guitarists Malcolm and Angus, looked at each other. Malcolm said: “Do that again.” They began playing and Johnno did it again, only louder this time: “Back in black!” And, just to keep the vibe going and because it was the first rhyme that came into his head, added, “I hit the sack!”

The brothers put down their guitars and Malcolm said, “Right, let’s sit and talk.” It was the beginning of one of the greatest partnerships in rock: Malcolm’s precision-engineered rhythms, Angus’s blood-and-guts soloing, Brian’s sandpit vocals, the rock-steady drums of Phil Rudd and the head-banging bass of Cliff Williams.

Or, as Metallica’s Lars Ulrich once put it: “The most awesome fucking sound in rock before it turned into heavy metal.”

Nobody knew that yet, though. They only knew that replacing Bon in the studio would be a seemingly impossible task. It was only after recording the title track of Back In Black that they realised they might actually succeed.

Brian would later claim he felt Bon Scott’s spirit was in the room with them when he was singing the vocals. “I felt something wash through me, like it was Bon saying, ‘You’re all right, keep going.’”

Even Malcolm, always the hardest member of the band to please, got excited. Listening later to the finished mix he exclaimed, “Fucking hell, this is a monster!” He wasn’t far wrong.