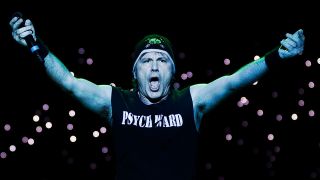 Steve looks into the spiteful mind of the sartorially dressed man behind the mask, and sets his brief but doomy psychoanalysis to an innovative frantic gallop that stops on a dime for the verse vocals and then it’s off to the races again. The classic version of Phantom Of The Opera was issued in 1929, starring Lon Chaney. A 1943 remake exists, but UK audiences most likely know the Hammer Horror version from 1962 the best.

Steve and Adrian’s bruising straight-up heavy metal rocker is a paean to the addictive UK TV series that ran briefly in the late 60s. Bruce Dickinson: ‘’The Prisoner was a favourite of mine, obviously being a huge fan of the TV series. I always remember the moment when we got Patrick McGoohan, who was star of The Prisoner and who also wrote the series, and we got his permission to use the opening lines of the series. We phoned him up. He’s in Malibu; he’s a recluse and you can’t normally get in touch with him at all. And we got through to him on the phone at home! And we said, ‘Hello, we’re a rock band from England and we’d like to use your bit.’ And he said, ‘What did you say you were called?’ And we went ‘Um, Iron Maiden,’ and he said, ‘Do it,’ and just put the phone down.”

Children Of The Damned (Number Of The Beast, 1982)

This deep album classic is loosely inspired by the 1962 British black and white horror movie of the same name (the sequel to Village Of The Damned), in which six children turn out to be extraterrestrials, all manner of violence ensuing. Offers Bruce, “I love that song. I have to say that musically we were heavily influenced by ‘Children Of The Sea,’ the Black Sabbath song. Take a listen. There’s a little bit of that about that song, in terms of structure. But other than that, it’s a beautiful song, almost plaintive at times, until it gets going (laughs).”

Bruce tells a war story of bullets and blizzards, amid an appropriately triumphant sounding soundtrack that is as acrobatic rhythmically as it is imagistic. Bruce: “I remember that quite vividly, because first of all, I was a huge fan of the movie – we all were. And secondly, there’s a drum part on it which is great. Nicko wanted to use a double bass drum and we wouldn’t let him and he did the whole thing with a single bass drum, and he still does and still refuses to use double bass drums. Because after playing that bit with a single bass drum pedal, he’s like, ‘No, that’s it. I’m going to use a single bass drum pedal. Everybody else is going to have to catch up.’”

Often considered a filler track, if only because of the golden chestnuts surrounding it on what is widely considered Maiden’s best album, Quest For Fire was hobbled immediately by Bruce’s opening line, ‘In a time when dinosaurs walked the earth.’ The 1982 movie was much more innovative than the Maiden track, the writers following a prehistoric tribe who quest for fire after theirs goes out, only to find another gang of simians who surprisingly have figured out flint and sticks. The whole story takes place through extensive body gesture and an invented primitive language.

Bruce goes to the war chest once again, for a brisk album-opening workout once more dealing with a time when men were airmen. The 1977 story of WWI’s 76 Squadron starred Christopher Plummer and Malcolm McDowell. Adrian Smith: “The first time we played Aces High was in Jersey, where we used to rehearse, in the Channel Islands. It’s a typical Iron Maiden song, one of Steve’s better songs, really exciting and up-tempo. It was like, yeah, if this is how this album is going, this is going to be a great album!”

A bit dodgy having two songs on one album about fencing, but there you go, The Duellists joining Flash Of The Blade as Powerslave tracks thrusting and parrying their way to ignominious filler status. The Duellists, a UK-issued flick from ‘77, starred Keith Carradine, Harvey Keitel and Albert Finney and examined the insane effect of honour and decorum during Napoleonic times.

Considered a bit of a rickety album, No Prayer For The Dying coughed up a few good tracks. Bruce turned in a rote emotional extraction from the military submarine movie of the same name, issued in 1958, starring Clark Gable and Burt Lancaster.

The Loneliness Of The Long Distance Runner (Somewhere In Time, 1986)

Many griped that when Steve started penning songs about jogging, the well had dried. Still, this goes deeper than that, especially in light of the excellent 1962 British movie of the same name, and its themes of youthful rebellion and alienation – it is a classic.

This Blaze-era track is a clunky straight re-telling of Falling Down, the celebrated hit movie from 1993 starring Michael Douglas, about a regular guy pushed to the edge by a so-called civilised society most obviously in the crapper. Musically the track is fast and melodic, distinguished by the hooky chorus, which finds Blaze – even straighter – going with ‘Falling down, falling down, falling down.’

Although the root source is Joseph Conrad’s Heart Of Darkness, this is really about Apocalpyse Now given the Saigon namecheck. Credited to Harris, Bayley and Gers, the song is stuffed with Maiden clichés, not the least of which is a standard Celtic guitar run followed by a gallop for less reason. Apocalypse Now is of course the Francis Ford Coppola epic of 1979, starring Martin Sheen, Robert Duvall and Marlon Brando.

Up to his old tricks on the band’s first reunion album, Bruce turns in a fairly mature and cryptic lyric that seems to have little link with the legendary Christopher Lee film. However, Bruce has said that a vague amalgam of the song, the title, and the stage set were inspired by the rarely-seen UK film, one  which is considered a bizarre cult classic, Lee adding fuel to the fire commenting that it contained the best performance of his career. 

Killers: The Irresistible Rise Of NWOBHM and Iron Maiden