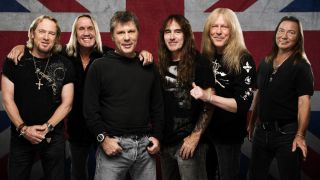 Iron Maiden’s classic Hallowed Be Thy Name has been voted their best track in the new issue of Metal Hammer.

It featured on their 1982 album The Number Of The Beast, which was also their first to feature frontman Bruce Dickinson.

And in the 50 greatest Iron Maiden songs of all time, which features in the new edition of Metal Hammer, Hallowed Be Thy Name saw off competition from tracks including The Trooper, Running Free, 2 Minutes To Midnight, Rime Of The Ancient Mariner and Heaven Can Wait to claim the top spot by bands, fans and Metal Hammer staff.

Bassist Steve Harris says: “If someone who’d never heard Maiden before – someone from another planet or something – asked you about Maiden, what would you play them? I think Hallowed Be Thy Name is the one.

“It’s always nice to rest songs if you’ve been playing them forever, because when you bring them back it’s exciting again. It’s always enjoyable to play that one.”

The full list can be found in the brand new edition of Metal Hammer, which also features Maiden on the cover, along with an interview with Harris ahead of the band’s upcoming UK and European tour.

The magazine also features While She Sleeps, Royal Thunder, Ghost Bath, Life Of Agony and more and is out now.