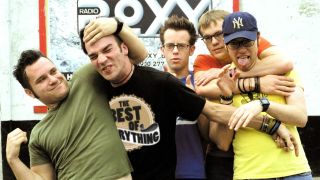 True to their name, The Get Up Kids were still teenagers when they released their first album, Four Minute Mile, in 1997. Raw, roughshod and ramshackle, it was an album that captured the frayed hearts and nerves of their years, their tortured songs of longing alternating between explosions of frenzied frustration and more quiet introspection. That most of the songs could have easily made this list is testament to the fact the band were writing way beyond their years even when writing about them.

1999’s Something To Write Home About, that the band broke through, serving as standard bearers for that new wave of emo bands that all seem to be signed to Vagrant Records, who had also snapped up the Get Up Kids. Truthfully, this list could also be comprised entirely of songs from that album, as well as – in this writer’s opinion – its follow-up, 2002’s On A Wire. There have been two albums since, 2004’s Guilt Show and 2011’s There Are Rules. Both contain a number of great songs (Man Of Conviction, Wouldn’t Believe It and Is There A Way Out from the former, When It Dies, Shatter Your Lungs and Rally ‘Round The Fool from the latter in particular), but when it comes to truly classic Get Up Kids tracks, pretty much everything is found on those first three albums. And believe us, it was difficult to choose – there are plenty that probably should be here but aren’t.

**11. CENTRAL STANDARD TIME (Eudora, 2001) **Released as a split 7” with The Anniversary in 1999, this song was later released on 2001’s rarities compilation, Eudora. A song about love across great distance, it’s practically doomed from the minute it begins. “There’s dividing lines between East and Standard time,” chokes singer Matt Pryor, “so promise me you’ll still be mine.” Of course, despite his clear and unfettered devotion, this essentially serves as a pre-emptive break-up song. Jittery and ramshackle in the best possible way, the music almost doubles up as the frayed nerves of the protagonist and his soon-to-be-shattered heart.

**10. I’M A LONER DOTTIE, A REBEL… (Something To Write Home About, 1999) **Its title might be taken from a line in 1985 comedy Pee-Wee’s Big Adventure,but the song itself is not quite so funny. Although centered around a one night stand – “One night doesn’t mean the rest of my life,” screams Pryor – the songs reaches far beyond bedroom encounters, invoking the wonder of the world and the adventures that lie beyond through the apologies and “roadside telephone” call the protagonist will be making to the girl in question. Yet despite that slightly knowing malice, there’s also a sense of romanticism attached to such youthful folly – a moment frozen in time as he forges forward into the future: “One summer night’s the only time we’ve known / Shut your eyes and when you wake I’ll be gone.”

**9. LION AND THE LAMB (Rock Against Bush compilation, 2004) **Recorded for the first volume of Fat Wreck Chord’s Rock Against Bush releases – two anti-George Bush Jr punk compilations put out by Fat Mike to help stop his re-election – Lion And The Lamb is probably the only protest song The Get Up Kids ever wrote, but it’s a damned good one. Gracefully melodic yet rough around the edges, it’s a forthright anti-war anthem – “I’ve never been one for war,” sings Pryor, “Sand we’re sinking in as thick as oil.” – that’s also shrouded in typical lyrical abstraction. But that only makes the listener think about the situation even more. Regardless of its politics, it’s a great tune that probably should have been on an album somewhere down the line.

**8. CLOSE TO HOME (Something To Write Home About, 1999) **There’s probably never been a more quintessential Get Up Kids lyric than the opening couplet of this song – “Summer swallowed us whole / We waited for you to come around” – but while it can be applied to any number of situations, it’s actually a letter to their hometown about how little Kansas seemed to care about the band, even when they were getting acclaim in the rest of the USA and abroad. Of course, in traditional Get Up Kids fashion, the lyrics somehow manage to be vague enough to apply to other situations but specific enough to avoid being meaningless platitudes. Driven by a frustrated urgency, the songs fizzes and fizzles before exploding into its euphoric, triumphant crescendo.

**7. RED LETTER DAY (Red Letter Day EP, 1999/Something To Write Home About, 1999) **There are certain themes that permeate the majority of The Get Up Kids’ songs – friendship, heartache, brotherhood, regret and nostalgia. This song has them all in spades, its yearning, urgent chorus struggling to break free from the shackles of the past by confronting it from the present. It’s a song that would be perfect to soundtrack an updated version of Stand By Me or some other coming of age, rites of passage movie, because, like many of the band’s songs, it’s a harsh but true depiction of how childhood glory fades as innocence is eroded, quickly or otherwise, by experience. The rallying call of hopeful naivety remains – “We’re loyal, like brothers / Just us versus all the others / Are you the one for me?” – but soon gives way to an epiphany driven by callous bitterness: “I trusted misleading promises worth repeating / How could you do this to me?”

**6. DON’T HATE ME (Four Minute Mile, 1997) **As sloppy and ramshackle the songs on the band’s debut record were – which is partly what made them so great – it was also clear that the band had some serious songwriting chops. That’s nowhere more in evidence than on the album’s second song, which transforms out of nowhere from a lo-fi, scuzzy, poppy slice of punk into this sparse yet anthemic singalong. Go to any Get Up Kids gig and the whole crowd will erupt into song when they play this. What’s more impressive, though, is how much the song still resonates almost 20 years later.

**5. TEN MINUTES (Something To Write Home About, 1999) **One of their best known songs, and rightly so, Ten Minutes is an earnest song about being on the brink of emotional collapse. Sung by the band’s secondary vocalist Jim Suptic, it’s centered around a volatile relationship that’s at breaking point (“A pointless fight when you’re always right”) while also acknowledging that even if there’s love lost, that doesn’t mean it’s all gone. (“Don’t be gone when I get home/ You’re all I have.”). Love’s a complicated, inexplicable thing, and Ten Minutes captures all its contradictions, difficulties and beauties in a few pithy lines.

**4. MASS PIKE (Red Letter Day EP, 1999) **If there were any justice in the world (and we know there isn’t), this is the song that would have made The Get Up Kids the biggest stars on the planet. Because Mass Pike is pretty much a perfect pop song – it’s got catchy hooks a-plenty, the band’s most singalongable chorus, simple but brilliant heartfelt lyrics (of course) and probably the best production quality of any of their songs. That’s not to say its poppy sensibilities undermine its credibility in the slightest, either – there’s still an edge to it and its central them of drowning your sorrows with a bottle of, well, whatever, is far from frivolous or meaningless. It’s precisely what pop music should be.

**3. HOLIDAY (Something To Write Home About, 1999) **Charging into life with the force of your first heartbreak, the opening song on Something To Write Home About is a sheer hurricane of a tune, whipping a head full of conflicting emotions – love, hate, disbelief, relief, regret – into a furious charge of cathartic energy. It lasts just three-and-a-half minutes, but destroys everything in its path in that time, tearing down foundations and hopes with its fierce melody and Pryor’s scratched and scathing vocals. It’s a song about looking back, but reliving every second of what was as you do, and as Pryor blurts out, “I’ve never forgotten all our yesterdays but I’m lucky if we’re speaking on the holidays,” you can almost hear the tears stuck in his throat. Pretty damn brutal.

**2. OVERDUE (On A Wire, 2002) **When third album On A Wire was released, most Get Up Kids fans hated it. Produced by Scott Litt – best known for his work with R.E.M. – it offered up a softer, gentler sound that alienated a great deal of the band’s fanbase, who presumably didn’t like its ‘soft rock’ tendencies. It’s a shame, because it’s a fantastic record from beginning to end, and contains, in opener Overdue, one of the most beautiful and poignant songs written by a modern rock act. Yes, it showed a less manic, more mature side to the band that had been hitherto unseen, but it also demonstrated their pure songwriting abilities. Few songs in the so-called emo canon hit as hard as this, however loud or authentic they are. Oh, and the animated video is wholly devastating.

1. SHORTY **(Four Minute Mile, 1997) **A frenzied burst of guitars and emotion, Shorty is a tale of lost friendship and love that also straddles the line between childhood and adulthood. It mourns the former and refutes the latter, desperately trying to cling to a past and a relationship that no longer exists, and hasn’t for a long time. Yet the nostalgia here is as bitter as it is fond – “The last time I saw you act like this we were kids,” spits Pryor over a flurry of messy, distorted guitars before, a bit later, the killer last line: “I bet you never find another friend like me.” It’s meant to be a defiant sign-off – and it is, to some degree – but you can feel in Pryor’s delivery the yearning and the ache to return to the past. Somewhat ironically, it was the band’s first release, which they then re-recorded for their debut full-length. That album version is far superior, but there’s also a certain raw, sloppy charm to the original – and that’ll have to do, because for some reason the album version isn’t on YouTube.