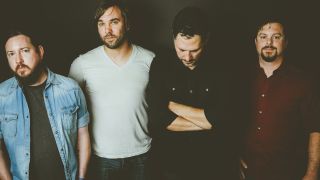 Seventeen years ago, four young men from an underground American emo band named Mineral decided it was time to go their separate ways. Their first album, 1997’s The Power of Failing, had received positive reviews at home and abroad, and a solid touring schedule around the United States with their peers in the likes of Jimmy Eat World, the Get Up Kids and Christie Front Drive had garnered them a small but faithful fanbase.

When it came, the decision to split was firm and unanimous, but Mineral had only one problem: the band was halfway through recording their second full-length. So the Texas outfit did what almost no other band has ever done before: they broke up, and then went straight back to the studio to finished the record. The result was 1998’s searing EndSerenading – one of the most distinct, devastating and enduring albums of the entire period, it has been considered an emo classic ever since.

This February, Mineral are finally bringing EndSerenading and The Power of Failing to British audiences for the first time, on a tour that no one ever thought would happen – including frontman Chris Simpson.

“It’s interesting to be told ‘Oh, remember that dream you had back in the day? You can go live that as a reality right now’,” Simpson explains from his home in Austin. “I guess we have our own way of doing things: putting out two records, then not playing for 17 years and then playing again! The whole thing is very weird. Even if it’s temporary though, “ he continues, “getting to travel the world and play is such a wonderful opportunity and experience for us, we’re definitely grateful. And a bit freaked out, sure.”

This reunion tour was initially prompted by Mineral’s 20th anniversary last year – “It sort of seemed like a natural time to go back and reconnect with it,” Chris notes – but that passage of time means that the band is coming back to a totally different musical environment than the one they left in 1998, when emo and post-hardcore were strictly underground genres, and venues on tour were a solid mixture of basements and back rooms.

“When we played back in the day, we were actually excited if we saw monitors!” Chris laughs. “Often times, it would be places that just had a PA and a vocal mic set up. In a way, we’re playing a lot more ideal settings than we were in the past, in terms of the venues, the size, the quality of sound systems… And I think we’re still playing good too. It seems to be connecting.”

Mineral’s initial return to the road happened last August, after six months spent re-grouping, re-learning songs and practicing once or twice a week. It was the first time in a decade that Chris had communicated with half his old bandmates. After Mineral split, Chris formed The Gloria Record with bassist Jeremy Gomez, followed, in the mid-2000s, by Zookeeper, a “more autonomous, singer-songwriter” project that Gomez also played on at times. Meanwhile, guitarist Scott McCarver and drummer Gabe Wiley went on to focus on side-project Pop Unknown, which started in 1997. When that band split five years later, Scott bounced between jobs for a while, before becoming a motorcycle mechanic, and Gabe went to work as a paramedic, before starting a family and going back to school.

“I’ve been close with Jeremy this whole time,” Chris – also a father of three – says. “But Scott and Gabe I really hadn’t seen or talked to much for the better part of a decade, even though we all live in the same city. We’ve basically been in the same Metropolitan area, just living different lives.”

Once the finally re-united band booked select dates around the U.S. last year, almost all of them, to Mineral’s surprise, immediately sold out.

“We’d been vaguely conscious of it throughout the years – the fact that there’s still some continued interest in the band and new people discovering the music,” Chris explains. “But really, until we got back together and saw the possibilities of this tour, I didn’t know exactly what amount of people there were who were really interested.”

When Mineral finally got back on stage, they realised that it wasn’t just their old audience coming to see them either – there were plenty of new fans too.

“There are people in their early to mid-twenties, probably even late teens,” Chris observes. “But there are definitely people our age and everywhere in between too. It’s kind of funny that our guitar tech was probably four when we broke up…”

Much has happened in the years between Mineral Phase 1, and this current rebirth. Not just the way independent music now operates – “The internet came in our life time and it’s easy to just go with it,” Chris says. “But it’s easy to lose sight of how drastically it’s changed everything. There is certainly still DIY culture and there are still DIY scenes, but they have that access to the internet, so it’s completely different” – but also the fact that the word ‘emo’ carries so much baggage with it now, thanks to the genre explosion in the early 2000s.

“I don’t think any of us saw it coming,” Chris notes of emo going mainstream. “I was pretty confused at the time. It is interesting because it’s such a vague term now. [Emo] became subsumed and attached to the mainstream – a lot of bands that were really just pop bands. It was almost an extension of boy bands from the ‘80s. I definitely heard people say ‘See what you started’,” he continues. “But I didn’t feel connected to what came later. The phrase got picked up and attached to all this other stuff.”

For now, Chris and his bandmates are unconcerned with anything that’s happened in the past, to either them or their scene, and are firmly facing forward. Helping them out on this side of the Atlantic currently is old friend, Frank Turner, who Chris notes has been “a really great endorsement” for Mineral on British shores.

“We played together at the Windmill in Brixton,” Chris explains, “probably in 2006 when I did a solo tour with Zookeeper. Frank was a big fan of Mineral and wanted to show me around the city for a few days. Back then he was just putting out his first EP, so I’ve known him for a long time. His label [XTRA Mile Recordings] reissued our records [in the U.K.] and helped us organise this tour. I understand that Frank is a big phenomenon over there now, which is cool.”

Ask Chris if there’s any chance of Mineral recording new material and he’s perfectly open and optimistic: “I don’t know that there’s any evidence yet that it will happen. For right now, we’re happy to have the tour in front of us to focus on. If anything of that nature would occur, I’m sure it would take a lot longer to develop. We haven’t really had time to do much other than prepare for these tours and do the task at hand. But,” he smiles, “I think it certainly could happen.”

Mineral play the following dates next month. Catch them at: