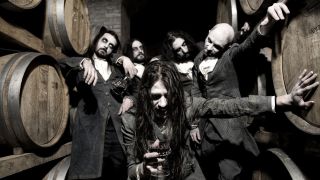 Italy doesn’t come up all that often in conversations about heavy metal – in fact, it has quite often been unfavourably compared to its neighbours in Europe. Those willing to take the time to explore this much-maligned scene however will discover that there’s more to discover, with world-class outfits representing a number of metal subgenres. Here are ten essentials for you…

Depending on your point of view Bulldozer can be considered either classic speed metal or proto-black metal. In any case, they are a seminal outfit who took the torch from Venom in the mid-80s and set about continuing the legacy of rowdy and riotous (yet often atmospheric) metal, exhibiting touches of Bathory, NWOBHM and of course, the godfathers themselves, Motörhead.

Death SS are an iconic and influential outfit (name-checked by Ghost among others) and overall a rather unique one. Existing since the late ‘70s, with vocalist Steve Sylvester the only constant (this is the source of the ‘SS’ in the name and also the reason for the debut album being titled …In Death Of Steve Sylvester), the band combine touches of doom metal, classic heavy metal, thrash and goth/death rock, gluing all the elements together with their distinctive and eccentric occult horror aesthetic.

Alongside bands such as Sweden’s Shining, Forgotten Tomb are one of the most significant bands in the depressive/suicidal black metal canon. Taking inspiration from everything from Thorns and Burzum to Katatonia and Paradise Lost, and even Joy Division and Christian Death, the group’s sound is rooted in doomy black metal but has increasingly added an effective blues rock/hard rock influence as the years have passed.

It’s not all doom and gloom in Italy, of course. Formed back in the mid-90s by Andrea Martongelli (a virtuoso guitarist who has shared the stage with the likes of Steve Vai and Marty Friedman), Arthemis began life playing power metal, something of a popular occupation in the country. As time has passed the group have evolved into a harder, more thrash-oriented outfit while nevertheless continuing to harness old school heavy metal influences, and plenty of technical wizardry.

While most extreme metal bands that feature orchestral and symphonic elements tend to come from a black metal background (Dimmu Borgir and Carach Angren to give but two popular examples), Fleshgod Apocalypse’s detailed compositions are built upon a firm foundation of brutal and technical death metal. The result is a dynamic, dramatic and hyper-intense musical journey that frequently takes combines aggression with apocalyptic grandeur.

Formed in the early ‘90s but surfacing properly towards the end of that decade. Aborym initially echoed the wave of experimentation that was going on within black metal at the time, but soon settled on an electronically-augmented direction, introducing elements of industrial and EBM into the mix to create a bleak and futuristic assault. Interestingly the band has featured Attila Csihar of Mayhem, Prime Evil of Mysticum and Bård G. Eithun (Emperor, Blood Tsunami) in their line-up previously, though they now have a completely Italian line-up and have moved away from their black metal roots somewhat.

Ephel Duath started out playing an avant-garde and progressive take on black metal, but turned heads after evolving into a more twitchy and intense jazz/metal fusion. Keeping the spirit of John Zorn alive (and preceding the not entirely-dissimilar efforts of the more recent Shining from Norway) the band carved an effective niche for themselves before shifting in more recent years towards a more conventional and (less jumpy) progressive metal sound.

Perhaps Italy’s most cult black metal band, Mortuary Drape have always existed in their own universe, their creepy and richly atmospheric take on the genre being instantly recognisable to fans. Their sound is quite unlike the Scandinavian model, being closer to the warmer, heavy metal-inspired Greek sound, with additional touches of Death SS-style occult drama and some parallels to the ritualistic vibe of Brazil’s Mystifier. A powerful live band and well worth a listen on record.

Monumentum’s history dates back to the ‘80s, despite their debut album (initially intended for release on Euronymous’ legendary Deathlike Silence Productions) only appearing in 1995. Regardless of the black metal connotations (the band also released a split with Rotting Christ in 1991) Monumentum’s music is actually rooted in moody, subtle, slow-burning gothic rock/metal, with male and female vocals and hints of Dead Can Dance, Christian Death, Death SS and more to be found. The band are sporadically active, most recently releasing an EP of covers of PJ Harvey’s The River(!)

It would probably be wrong to talk about Italian metal without mentioning Rhapsody Of Fire (formerly ‘Rhapsody’), such is their international success. One of the acts to really help popularise symphonic power metal, the band was created by Luca Turilli and Alex Staropoli and quickly won over fans with their sweeping, classically-influenced and highly melodic take on the genre. An amicable split between Turilli and Staropoli took place in 2011, and thus there is curiously now two bands for fans to enjoy; Rhapsody Of Fire and Luca Turilli’s Rhapsody.