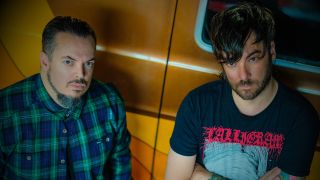 Iggor Cavalera should be a familiar name to most metalheads, having helped change the face of heavy metal with Sepultura and continued to carry the torch with brother Max Cavalera in The Cavalera Conspiracy.

The band’s self-titled debut for Rocket Recordings represents a batshit crazy grab-bag of sounds, drawing from the duo’s shared love of breakcore, metal, industrial and electronica to create something that’s head-poundingly abrasive and yet driving, danceable and catchy.

The panoply of influences at play is intriguing and, for those of us who’ve lived lives steeped in guitar music, perhaps a little bewildering. To help navigate these unfamiliar waters, Louder asked Iggor for a primer of sorts – some entry-level tracks he’d recommend to lifelong metalheads keen to expand their horizons.

“Sometimes I like to think of when I heard metal, punk or hardcore for the first time,” Cavalera says by way of explanation. "That’s what I was thinking when I put this list together: to put people in that position, like being in a club at six in the morning, where the sound system is so strong, you can’t even see who’s playing and a song just hits you. That was my approach.”

"Aaron Spectre is such an amazing producer and performer – he’s the reason that I do Petbrick, he introduced me to Wayne. The whole album, Grist, is amazing. I was in Belgium with the guys from Soulwax digging for records, and this guy was like ‘I have this one here but I’m not sure if you guys are gonna like it…’ and it was just… yes! This is amazing! This song goes from breakcore to grind to some technical, weird mathematical things, but it also has a groove. It’s one of my favourite songs on the record."

"This is a bit of an underground classic. It’s one where I was in a club and it just hit me. The minimal sound of it and the way they chop the drums is quite special – it’s all about those layers, and the spaces in between them. It’s difficult to do that without it just becoming one big block of sound."

"I went to see them in Italy, and they had the big cross with the Marshall stacks, and the music was super loud – it was pretty much the closest thing to watching a metal concert with an electronic crowd, and it was such a refreshing thing to see. When that EP came out, I remember DJing it at soundcheck, and the guy from the club told me ‘I think that record’s no good, you have to take it back, it’s too distorted.’ He was surprised that it was exactly how the band wanted it to sound, and that’s how a lot of the stuff we did in the early 80s sounded to a lot of people. Records like Morbid Visions and Bestial Devastation were intended to sound like they were wrong, and Justice had that attitude."

Public Enemy – She Watch Channel Zero?! (It Takes A Nation Of Millions To Hold Us Back, 1988)

"The big [rap/rock crossover] hits would be Anthrax with Public Enemy or later House of Pain, but this one, to me it speaks louder. They switch things over – they were teaching hip hop kids about noisier stuff, rather than those other collaborations which seemed more about showing white kids hip hop.

"In the 80s a lot of the metal guys were super close-minded. A friend came to stay at our house – at the time it was me, Max [Cavalera, Iggor’s brother and Sepultura singer/guitarist] and Andreas [Kisser, Sepultura guitarist] living together. It was right before we did Beneath The Remains, and we were pretty much addicted to that record. This guy said 'how the hell can you guys only listen to this stuff?! I think your next record’s going to be a rap album!'"

"They were the pioneers of crossing over, from the electronic or rave scenes to rock. I tried not to pick one of the typical songs that became massive hits. It’s so skilfully constructed – a lot of metal or punk bands, they have that thought when they write a song: starting out and building something that climaxes like that. I go to see them all the time, and I’m a huge fan of what they’re doing to this day."

"Venetian Snares is one of my favourites in terms of people who are pushing boundaries. Like Dave Lombardo or Ginger Baker, he’s someone who’s writing stuff where it’s like ‘how the hell did they come up with that beat?!’ And he’s really into mixing classical music with noise and glitchiness, and I think that’s quite a modern way of looking at classical music."

"Huoratron is this guy who does videogame or 8-bit music that’s also super aggressive. He used to release music on this label called New Judas, which Mixhell was on as well – that’s how we became familiar with him. He’s amazing – it’s aggressive, but also easy to listen to. And he’s a beast – if you see him live he’s a scary motherfucker."

"Again this was one of those Berlin things that can be as hard as watching a metal or a hardcore band in front of the PA. I remember this guy called Len Faki, a Berlin DJ, playing this track and I was blown away. It’s very minimal, but every element is sculpted to hit you as hard as possible. It’s something that speaks volumes to me."

"This was a combination you could never imagine happening – the biggest straightedge guy with the biggest junkie. The song is a monster. I love Ian MacKaye’s voice and I also love all the stuff that Al Jourgensen produced. I believe the person who showed it to us was Scott Burns during Arise. Me and Max were blown away by it, because we were fans of both styles – Minor Threat and the crazy Wax Trax stuff."

It’s funny, because if you listen to the singer from Nitzer Ebb he almost has a James Hetfield vibe. An early, Kill ‘Em All vibe of course – not the country hunter James Hetfield. It has the rock vibe but it’s completely electronic, the drums are 808 all the way and there are no guitars. It’s cool when stuff like opens up to such a variety of people, influencing someone like me who’s into metal to people who are into Ibiza and the Balearic scene.

Dominick [Fernow] is a good friend of mine and does a lot of cool projects, like Vatican Shadow, Prurient and his label, Hospital Productions. I love his records, they’re noise but they have a lot of cool musical elements. The guy who produced the Prurient stuff, Arthur Risk, also produced the last Cavalera Conspiracy record, so we have this thing in common.

Petbrick's new album, I, is available now via Rocket Recordings. Catch them live at one of the dates below: