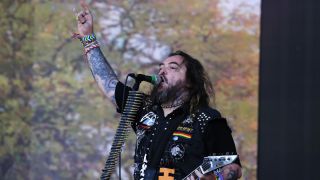 At British Summer Time we caught up with Soulfly's Max Cavalera after they opened the main stage in Hyde Park. Originally recorded for the Metal Hammer Radio Show, you can read the interview in its entirety here.

Are you going to be watching Sabbath tonight?

“Yeah I am, we have the whole day here and it’s great weather. It’s a fantastic bill, lots of great bands like Motörhead, Faith No More, Soundgarden, Black Sabbath – it’s unmissable. So I really want to stick around and catch, if not all of it at least a little bit of every band and the crowd is fantastic. I had a great time, I really loved the crowd and the UK never lets me down.”

For a lot of people Sabbath are the source for metal, in your book, are they are still the ultimate inspiration in the world of metal?

“Yes. I mean for me, when they released Black Sabbath I was one year old. I was shitting in diapers and they were playing Paranoid. They’re just such a great band – Tony Iommi’s riffs, Ozzy’s voice, and they’re good guys too. They’re really good people and they did a lot for the metal scene. So for me, Sabbath and Motörhead are the forefathers of metal in general, that’s why I had to watch a little bit of Motörhead today as well. It’s so great to be here and be part of this historic show.”

For metal bands from around the world, places like Indonesia, Israel, Afghanistan or Iran, they actually cite the work you did with Sepultura as their inspiration, because like them you were from the rest of the world not just the UK or the States. Do you feel a bit like a proud father for the explosion of the global metal scene we’re seeing nowadays?

“It’s good to hear that, it makes me feel very proud, and I love the fact that these bands are coming from these parts of the world like Iran, Iraq, Afghanistan. I kind of try to follow the metal scene, and get into these new bands. I love Man Must Die from Scotland, Psycroptic from Tasmania, and there’s a huge scene in the States, great bands like Nails, Full Of Hell, Noisem, Disciples Of Christ – this heavy grindcore stuff, and to me it’s great.

When we were doing that in Sepultura, we had no idea we were going to influence a lot of people. We were just doing it because it was all we knew how to do. We hated day jobs, it sucked to work at factories and we loved metal. It was our way out of the poverty, because we were broke. The beginning of Sepultura we were sleeping under the stage broke, didn’t have money to by a Coca Cola in the studio. There’s footage I watched the other day of us recording Rise in the studio, and I ask for money to borrow for a soda because I wanted a soda before I recorded vocals, and we didn’t even have money for a freaking soda! A lot of that counts, I think people from other parts of the world feel that reality that Sepultura brought. It was real. We were saying refuse and resist, and there’s a hardcore reality attached to those lyrics, that people connect to it and I love it, it’s a big part of me. But life goes on, I’ve got Cavalera Conspiracy which I love doing with Iggor, we have the third record coming out in October. I have Soulfly still going, nine albums now. Killer Be Killed, the project I did with Greg [Puciato] and the guys from Mastodon, so I’m keeping as busy as I can and it’s great.”

What can you tell us about the new Cavalera Conspiracy album?

“It’s called Pandemonium and it’s very, very heavy, it’s the heaviest of the three. I was really, kind of possessed to get Iggor back to his Rise era of drumming everything fast. We almost called the album Fuck The Groove, it was a joke, every time we went into the groove, like ‘fuck the groove, get back to the fast’. So the whole record’s fast, it’s really, really full energy stuff. It’s on Napalm Records, they heard the record and loved the record, and they’re very excited. We have a really cool album cover. It’s kind of a tank with a skull on top of it, it’s really metal.”

You need a skull to make it properly metal, right?

“A skull is the universal symbol of metal, and a skull and a tank together is like bread and peanut butter.”

What is your favourite Sabbath song?

“Symptom Of The Universe, it’s my favourite ever riff, I think it’s the best riff ever written in the history of rock and metal. We played a little bit tonight, we did the intro. I had to do it because I couldn’t help myself, so we played the beginning of it. I don’t know, there’s a power on that song. When you listen to the original version it’s great, but also I love the Speak Of The Devil version, that opens the Speak Of The Devil Ozzy live album, it’s just awesome. I think Iommi is the best riff maker ever and I learnt a lot from him, and to me he turned it into an art form. A lot of people don’t realise it, but making riffs is an art form, it’s a craft, it takes years to get it perfected. When you find a cool riff, when you hear it you get goosebumps, that’s the Symptom Of The Universe riff. I’ve been lucky with Sepultura and Soulfly to get a couple of riffs that people remember, like Refuse/Resist, or Roots, or Jumpdafuckup, they’re very memorable riffs. I play with four strings, and I take riff making extremely seriously, I think it’s an art form, and I love the art of making riffs, I think it’s great.”

Also Richie Cavalera has an upcoming Incite album, how instrumental have you been in his development?

“I stay out of it and let him do his thing, the same as with Lody Kong, which is also my other kid’s band. They recorded a whole record and it’s really, really amazing, and I think Richie’s record is really good. They recorded it with Matt Hyde and he’s the producer that did Deftones and Slayer, and I think it took them to another level. The record’s really good but I stay out of it, let them do their thing. I don’t really get involved, not even tips, it’s up to them to find their way.”

Have you never found yourself saying “when I was a kid”?

“Well a couple of times I’ve told them stories about life on the road, and doing this and doing that. When they go in the studio I tell them stories about recording vocals, but I think it’s cool for them to learn on their own. I don’t have to tell them everything, part of the mystery and beauty is discovery, it’s for everybody and I continue to discover new things, even now, even at my age, even after all these albums, you still get moments in the studio where accidents happen and that’s the coolest thing that can happen.”