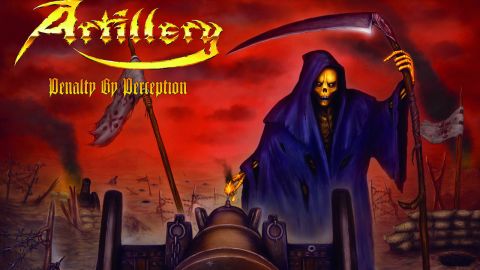 No doubt about it: brothers Michael and Morten Stützer are two of the greatest thrash guitarists in the world.

Ever since 1985’s Fear Of Tomorrow, they’ve assailed us with astonishingly dense wall-to-wall riffage, delivered in their very own unique style. 1990’s By Inheritance saw them hit their peak in terms of commercial accessibility, before placing the overall emphasis back on heads-down mayhem for subsequent releases. Penalty By Perception may be the closest they’ve come to finding the perfect balance between chorus and chaos.

It’s still absolutely nails-hard, with the patented Stützer riff-storms well in evidence, but tracks like the opening In Defiance Of Conformity or Live By The Scythe can almost (whisper it) be crooned in the shower.

And the album’s second half eases off on the tempos, so that Deity Machine and Path Of The Atheist have a little more space in which to kick your face off. Provided you’re not turned off by the Euro-wailing style of frontman Michael Bastholm Dahl, this is an amazing piece of work that must be nailed to your collection at once.