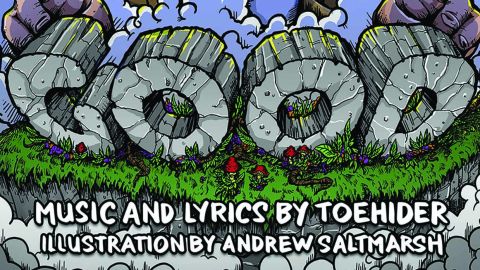 You might think that for a band that have unleashed a seemingly never-ending tidal wave of releases in the last decade, and at one point 12 EPs in as many months, the creative juices might be running bone dry. Not Toehider. Led by octave-spanning vocalist and multi-instrumentalist Michael Mills, the Australian prog rockers’ latest full-lengther GOOD shows that things can still be kept fresh. The title track opener evokes comedy rockers Tenacious D, the following funny things nods to the off-kilter prog-punk of Cardiacs and Millions Of Musketeers sounds at times like the pumped-up metal chops of Protest The Hero doing the tango with Queen. And then there’s the peculiar storytelling in the lyrics amid the phantasmagoric music. ‘Dan VS. egg, it’s not that hard to get,’ Mills soars in, erm, Dan VS Egg. ‘There’s Dan seated there with the egg at a six-sided table – and the table’s not set.’ The musician recorded and wrote almost everything on GOOD, and the album feels like another crystallisation of Mills’ masterful, musical mind. Dream Theater’s James LaBrie says the “man can do anything”, and with little to nitpick here, he might be right.