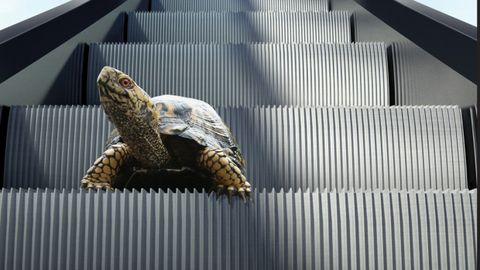 Tiles have spent 22 years crafting a series of highly proficient heavy-prog records that simmered but, with the best will in the world, never quite came to the boil.

Presents Of Mind may have been praised by Ian Anderson and Mike Portnoy – both of whom appear on this latest set – back in 1999, but an elevation to the big time never came along. Now, at the sixth time of asking and returning after
the greater part of a decade, the Detroiters are releasing something to really turn up the heat.

Produced as ever by Terry Brown, the Rush mastermind with whom Tiles have been entangled since 1997’s Fence The Clear, Pretending 2 Run is an ambitious two-disc set with a running time of over 96 minutes. With Alex Lifeson popping in for a guest slot on their previous album, 2008’s Fly Paper, and their artwork often designed by Hugh Syme, the band have left themselves open to comparison to Rush for quite some time. In doing so they faced a no-win scenario. There’s no harm in being influenced by a particular group but no-one will ever out-Rush Rush – it cannot be done.

Imaginative, diverse, more satisfying than ever before.

With the exception of Brown and Syme, there’s a conspicuous absence of Rush personnel this time out, though in every other sense Tiles threw open the studio doors to welcome an impressive selection of friends. Strings, choirs and numerous cameos are employed to ignite the complex storyline of “a man blindsided and disillusioned by betrayal.” This additional instrumentation flavours the proceedings, rendering the results more imaginative, expansive, colourful, diverse and – most crucially of all – satisfying than before.

Max Webster’s Kim Mitchell adds a scintillating guitar solo to Shelter In Place, while Adam Holzman, keyboardist in Steven Wilson’s band, and jazz-fusion guitarist Mike Stern trade off another during the 11-minute Taken By Surprise. Tucked away on disc two, Ian Anderson’s arrival helps to turn Midwinter into something special, daubing his flute across electric pulses and layers of keys to overturn all potentially grim connotations of its title.

Elsewhere, Mike Portnoy and son Max (of Next To None) appear together on record for the first time during the psychedelic-flavoured Fait Accompli, bass player Colin Edwin of Porcupine Tree enhancing the already sombre mood of Small Fire Burning. And yet, some of the unaccompanied material – the luxuriant Friend Or Foe, the concise yet fragrant sign-off of Backsliding – represent definite highlights.

In the biography, guitarist Chris Herin admits: “We needed to do ‘something more’ if we were going to record another album.” Mission accomplished, then.