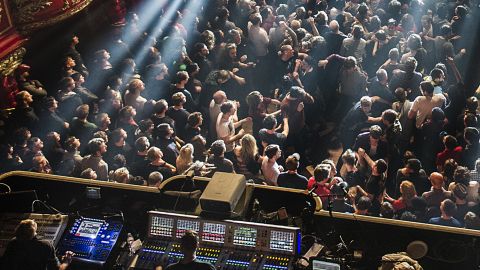 As someone once sang, ‘Making your way in the world today takes everything you’ve got.’ well, making a name for yourself in today’s online world takes a bit of doing too. Picking a distinctive band name that will allow people to find your music has never been more important. Prog metallers agent have decided not only to change their generic-sounding name, but have undergone a line-up change and taken a slightly different musical direction.

Tonight, agent relaunch their career as Temples On Mars with this debut performance, ahead of the spring release of their self-titled first album. Gods & Kings is a promising start. Agent always had a knack for writing a hook or two, as evidenced on their 2013 album Kingdom Of Fear, but this sounds more streamlined, more urgent, while keeping the metallic edge.

Frontman James Donaldson is having a blast, giving it all the rock star bravado he can muster. He gestures to the slightly reticent crowd to come forward, which has the effect of splitting the audience in two – those who are into it and those who continue to noisily chat at the back bar. Oh well, their loss.

When Gods Collide shows off a tight, well-rehearsed unit. drummer dean Gibb deserves a lot of the credit for this: his double-kick work and airtight fills propel the song onwards. This is good stuff, reminiscent of the catchy prog metal of Long Distance Calling’s recent Trips album.

Current single So In Love With Your Own Drug has arena rock melodies and an accessibility far beyond the prog sphere. Fans of Muse, take note. It’s a shame, then, that what should have been a clarion call is marred by vocal issues due to in-ear monitor problems.

Daz Carikas’ slap bassline punctuates the heavier Black Mirror, which closes the set. Five songs over the space of half an hour is hardly a definitive representation of what’s effectively a new band, but this has been an encouraging first outing. Agent are dead. Long live Temples On Mars.