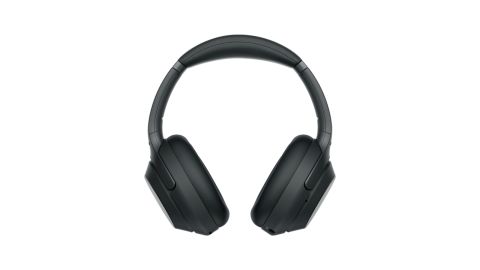 Offering excellent sound quality and best in class noise cancellation, Sony’s WH-1000XM3 are the noise cancelling headphones to beat when it comes to premium head-fi. Honestly, you won’t want to take them off.

Now in their third generation, Sony’s XM3 over-ear noise cancelling headphones set the bar high when it comes to sonic performance and sound isolation. Their understated design may be largely unchanged, but there have been some serious revisions in performance, much of which can be attributed to the QN1 noise cancelling processor on-board, said to be four times more efficient when it comes to cancelling hubbub than its predecessor, the WH-1000XM2.

While you would be hard pressed to spot the difference between these various generations of Sony headphones in a line-up, a revised headband fits more snugly to the head, and the look is a little more streamlined.

The cans come in two colour variants, classic black and silver-platinum grey. The latter are particularly classy, but you won’t go wrong with either.

Significantly, these headphones also optimised for Sony 360 Reality Audio, now offered by Amazon Music HD and Deezer. 360 Reality Audio, in case you haven’t heard, is a fully immersive sound format that places objects around your noggin in three dimensional space.

To be honest there’s precious little you might actually want to listen to in 360 right now, although Argent’s classic God Gave Rock and Roll to You (on Deezer) shows the potential of the format. The remix seemingly sits you centre stage, band playing in the round. When Rod Argent’s almost a cappella chorus kicks in you’ll think he’s crept up behind you, to croon politely in your ear.

Sound quality is top notch. Naturally these headphones are high-res audio enabled, and spatial imaging is excellent, creating a soundstage that seems to extend well beyond the confines of their sizable 40mm Liquid Crystal Polymer drivers.

Slipknot’s Unsainted (We are not your kind, UHD Amazon Music HD) beats like a hammer drill to the back of the head, while riffs bludgeon left and right, and eerie keyboard whistles pirouette. All the while, Corey Taylor’s gruff vocal is literally in your face.

Bass is powerful but not exaggerated. Escape The Fate’s One for the Money (Ungrateful, Amazon Music HD), has a granite groove but these Sony’s still manage to swagger under the weight.

Mid-range and high frequency reproduction is delicious. The lyrical piano that opens Linkin Park’s In the End (Hybrid Theory, UHD Amazon Music HD), sounds classically musical, the cans creating plenty of space for the chords to resonate. Skipping to Numb (the same album, this time on Spotify), there’s a drop in resolution but the plaintiff vocal still has palpable body and soul.

These are great headphones to commute with. Noise cancelling proves sensationally effective. There’s a short optimisation routine, which makes adjustments depending on your head shape and whether you wear glasses, and the outside world melts away.

Once again, the ear cups provide track and listening control. You can pause music and mute noise cancelling simply by cupping the right housing, the Quick Attention mode. There’s also an ambient sound mode, which lets extraneous noise in, helpful if you want to listen for announcements while travelling.

Designed to accompany the headphones is Sony’s own Headphones Connect app, which offers up a little more customisation. Adaptive Sound Control automatically detects your activity, registering whether you’re travelling, walking, or slouched at a desk, and adjusts ambient sound settings to suit.

There’s also some virtual soundfields, aka Sound VPT, which mimic the audio experience of different listening environments, such as Concert Hall, Arena, Club, Outdoor Stage, although we rarely felt the urge to use them.

You won’t get a headache wearing these headphones out and about. The revised headband is thoughtfully cushioned, and the foamed urethane cups indecently soft. They’re easy to sport for long periods, and more than up to prolonged duty on a long haul flight.

The WH-1000XM3 come with a carry case, headphone plug adapter, 1.2m headphone cable and USB-C cable. Fully charged, they’ll play for the best part of 30 hours. And if you do run out of juice, they’ll work passively through a cable connection.