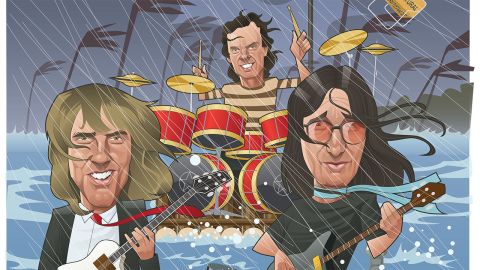 There’s a tendency among some prog fans to regard accessibility in their heroes’ work with a certain contempt. Surely, this music wasn’t meant to be remotely easy, right?

Inevitably, there were a few fans who reacted to Rush’s first taste of UK singles chart success with that kind of dismay. The opening track of this seventh studio album, The Spirit Of Radio (a No.13 smash, pop pickers!) is short, snappy and irresistible from the kinetic buzz of that opening guitar figure, and it formed the first part of an opening double-whammy on this album that is a textbook example of how to make more concise prog compositions without dumbing down or smoothing off any jagged edges.

Freewill follows, and while managing to incorporate sections in 13/4, 15/4 and 12/8 time signatures, it still stands as one of Rush’s catchier efforts thanks to a proudly anthemic chorus (in 3/4, since you ask).

Lyrically too, Neil Peart is on incisive form. After Spirit…’s tribute-cum-warning about the importance of artistic freedom and the threat from ‘glittering prizes and endless compromises’, on Freewill, his libertarian philosophy produces a succinct response to the strict moral codes of organised belief systems. Some choice lines are also directed at religious zealots such as ‘blame is better to give than receive’. But all that stands apart as a three-minute song-within-a-song, playing out before what stands as the highlight for a lot of Rush fans. Lee’s lithe Rickenbacker bass decides to wander outside to energetically stretch its legs, and as Peart follows, paradiddles at the ready, Lifeson catches up with a splenetic outburst of jazz-metal fret histrionics. Some songs are taken to the bridge – this one leaps right off it, before resurfacing with a final triumphant chorus. Right there we see the end of an era – and a decade – for Rush and the start of a new one.

While nine-minute album closer Natural Science is the kind of vintage song-cycle of freewheeling but hard-hitting guitar rock that could have graced any previous Rush record, elsewhere there’s clear evidence of new influences creeping in. The synths that form the hinge on which Jacob’s Ladder turns midway through channel the futurescapes of Kraftwerk and Tangerine Dream, even as a stuttering tempo starts to rebuild around them. The romantic paean of Entre Nous also features analogue synth and then Different Strings fades out with a distinctly bluesy Lifeson solo. It’s a source of eternal puzzlement why it tails off so quickly.

They even escape unscathed on that stickiest of wickets for any rock band – dabbling in reggae. Admittedly it’s only for a bar or two during the final passage of The Spirit Of Radio, as they playfully ape Simon & Garfunkel’s The Sound Of Silence with Peart’s sardonic lines ‘For the words of the profits/were written on the studio wall… concert hall.’ But it would be a trick they’d return to on subsequent albums, reflecting a fast-evolving musical landscape where the old genre barriers were no longer the cast iron dividing lines they had once seemed.

Forty years on, it may seem a little, well, rich to hear this band going on to music that ‘echoes to the sound… of salesmen’ on an album that was reissued in this (very fine sounding) remastered form on vinyl only five years ago, and only offering unreleased live cuts by way of reward for loyal fans shelling out once again. However, the luxury box set version of this release really is a handsome beast. A glossy hardback book of sleeve notes with new alternative cover art, copies of Peart’s handwritten lyrics, a reprinted original tour programme and a fair bit more besides, as befits a price tag that will set you back £130.

Of course, to 21st century ears this is an album that leaves you wanting more – the six original tracks last barely 35 minutes, That’s a fraction of an afternoon’s worth of music that modern prog acts spread over albums these days. So at least fans can settle in for an extra 80 minutes of live tracks from the 1980 tour that followed the album’s release. The sound quality is hardy comparable to the HD live recordings one can get these days, but if you can live with that, there’s a lot to like. There’s an agreeably hysterical edge to Lee’s vocal on older track Beneath, Between And Beyond, and By-Tor And The Snowdog sounds positively avant-garde at points as Lifeson whips up a fearsome maelstrom of metallic noise. The readings of songs from this album also have an extra urgency, not least a feisty, emotive take on The Spirit Of Radio that pretty much defines the phrase “once more with feeling” and benefits from a real, life-affirming roar after the words “concert hall”.