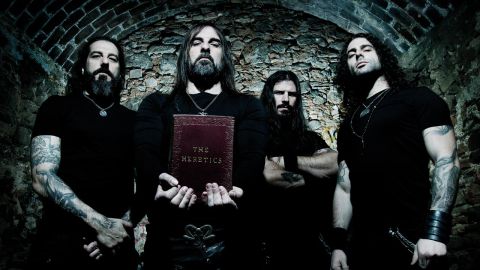 Whatever label you care to place on their blasphemous machinations, there’s been no denying the power of Rotting Christ’s continued evolution into an ever more challenging and riveting form.

While their 13th effort is a natural successor to 2016’s Rituals, The Heretics’ empowering proclamation still sees the Greeks shattering all notions through its 10 tracks that are both grim and grandiose, impenetrably dense yet impossible to escape.

Continuing with an increased use of the compelling Orthodox chants alongside melodies and languages seemingly transported from throughout the ancient and medieval world, the Tolis brothers again conjure all manner of esoteric atmospheres and forbidden realms while bludgeoning away with the finest distillation of extreme might honed over their 30-year voyage.

The choral opulence builds through Heaven And Hell And Fire and astoundingly epic The Voice Of The Universe alongside Sakis Tolis and George Emmanuel’s regal guitar melodies. It then takes centre stage on the unsettling heights on the Dies Irae’s nefarious summoning, while Hallowed Be Thy Name sounds like Manowar fronted by a Benedictine choir.

Whether it’s Vetry Zlye’s haunting majesty, Sakis’s spoken word on the nihilistic black metal evocation of I Believe or the monolithic spells cast by Fire God And Fear and the giddying rapture of The New Messiah, these are not just exhilarating heavy metal tracks, but tomes of vast depth and mystery to endlessly lose yourself in, and only come up for air when the true meaning of their Ancient mysteries seem tantalisingly within your grasp.

While a repeat of using poetry over a fairly simplistic refrain – swapping Rituals’ William Blake for Edgar Allan Poe – on The Raven finishes proceedings on a relatively mundane note, The Heretics is otherwise so affirming in its scale and sheer will that it’s already a contender for both album of the year and Rotting Christ’s finest collection to date.