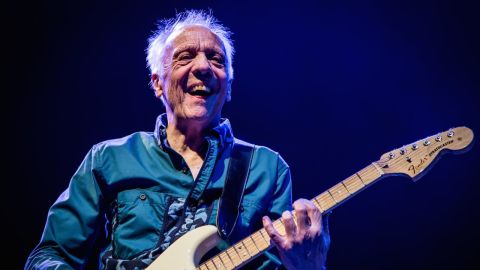 There are some who believe Joanne Shaw Taylor is becoming a major player on the blues rock scene. And to some extent, it’s easy to see why She plays up a storm on guitar, and has a voice reminiscent of Beth Hart or Bonnie Raitt. But what’s lacking is passion and personality.

She gets a polite reception here, yet doesn’t quite have what it takes to lift everyone, This might change in time, and there’s no doubting her potential, but right now Taylor flatters only to fall short.

Robin Trower is low key. Always has been. His stage set up is simple and sparse. He has two Marshall cabs, bassist Richard Watts uses just one, and drummer Chris Taggart has a very rudimentary kit – and that’s it. No need for effects, explosions or dazzling lights. What matters here is the music.

Playing the whole set using just one guitar — his trademark white Fender Strat — Trower mesmerises with the expected fluid, fluent approach. From the opening, tingling Somebody Calling, he’s in complete control, augmented by Watt’s vocals, which have the prowess if not quite the character of the late, great Jimmy Dewar.

Every song is used as a springboard for Trower’s inimitable virtuoso sensibilities. But, despite being the centre of this universe, the man never overstates his own idiom, every note accentuating the intricacies of the song in question.

There are the inevitable highlights, with Day Of The Eagle and Bridge Of Sighs generating a particular frisson with the crowd, but Daydream and The Turning are equally as enticing.

Such is Trower’s diffidence that he barely communicates verbally, restricting banter to the occasional bout of “Thank you, we really appreciate it”, in a voice with a slight Transatlantic twang. But nobody comes along to see this man because he’s a bon viveur; it’s all about musical prowess, mixing a clear blues background with a distinct, often overlooked, psychedelic perspective.

Ending with Too Rolling Stoned and For Earth Below, Trower only played for 90 minutes, which is a considerably truncated set compared to his marathons in the past. However, he holds everyone in his thrall throughout, leaving no-one in any doubt that he deserves iconic status.