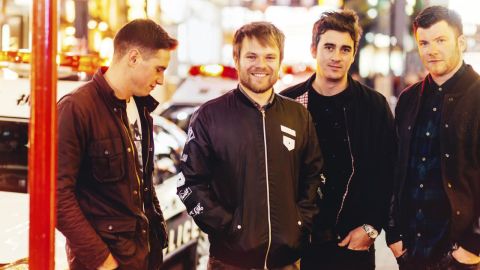 When exactly the old rock music of yore shook off the snobbish shackles of its hairy white past to veer from the 4⁄4 blues-based template and embrace not only more synthetic-sounding genres but the technology that created them is not entirely certain. The slow-merging symbiosis of sounds as disparate as hip-hop, drum n’ bass, industrial and techno – and more recently EDM and dubstep - has been a natural evolution. And though the success of The Prodigy two decades ago saw a seismic shift in perceptions, it’s Enter Shikari who have taken rock into the boldest new directions in their wake.

This once-in-a-generation band have risen the righteous way – through creative risk-taking and hard graft - to occupy a position as perhaps the only British rock band capable of headlining of festivals who have not yet done so. The Mindsweep will surely change that.

A musical maelstrom shot through with memorable melodies and Rou Reynolds’ articulate flow on his spoken word manifesto-for-living, opener The Appeal & The Mindsweep I sets the mood. A clarion call to refute complacency it draws on all the weapons in the Shikari arsenal: gang chants, air-punching chorus and a dizzy array of riffs doing battle with trance tones. Thematically The Mindsweep expands on previous ES lyrical preoccupations: elite global powers and the insidious evils of capitalism, with a dash of 21st scientific discovery for good measure. Equally as memorable is the lairy Anaesthetist, which combines grime, big beat and metal and features the line, “You fucking spanner!”

There are softer moments here too – emo-flavoured breakdowns and pop-punk flourishes that don’t always sit easily with the band’s more explosive moments, but are nevertheless necessary to temper the swirling chaos around them. Equally there are no shortage of surprises: the thrusting 80s-synth pop flecked break on The Last Garrison; the elegiac trumpet-laden of Interlude; the djent-influenced nu-prog of The Bank Of England and the celestial, space-age ballad Dear Future Historians. Reynolds’ raps meanwhile mange to recall key overlooked 90s crossover Brit bands such as Senser and Blaggers ITA as well as a whole wave of nutty rave MCs, while still quoting Roman poet Horace. In Latin.

Album highlight There’s A Price On Your Head is just brilliantly berserk – a math-metal homage to SikTh (whose Dan Weller produces here), with a string-laden conclusion that’s more Stravinsky than SOAD.

All the best bands polarise opinion and take on the musical generations that went before. They challenge consensus, blow away the cobwebs that have gathered on their forefathers. This quartet might cite Rage Against The Machine as an influence but never try to be them – or anyone else. Instead of moaning about the state of ‘the industry’ they’re helping re-shape it. And if ‘Enter Shikari: the early years’ represented the teenage hordes creating a ruckus in festival pits on their first weekend away, then a full decade into their career and The Mindsweep sees the quartet fully grown up and graduating, fully prepared not just to challenge power, but become the power itself.