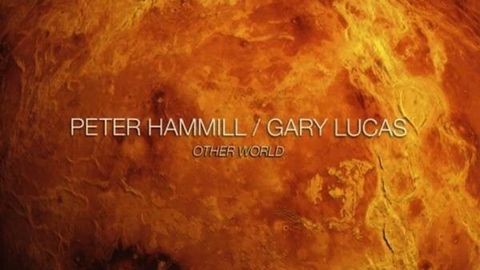 During Attar Of Roses, just one of a series of mercurial instrumentals here, a gentle trickling of water can be heard weaving a route between the ruminative, introspective guitars. It would make the perfect soundtrack to an imaginary Western: two dust-caked desperadoes holed up in a secluded, echoing creek, reflecting upon the tumultuous events that had led them both to this point in their lives. Come to think of it, the notion of Peter Hammill and Gary Lucas as a pair of outlaws isn’t too much of a stretch. Both have a wary disregard for orthodoxy and a decidedly ornery aversion to remaining within the confines of whatever box the critics like to place them in.

At its heart, this is nothing if not a porous partnership born from innate curiosity and a mutual desire to embrace discovery. Containing Hammill’s often poignant observations and Lucas’ eerily half-lit cinematic dreamscapes, ideas migrate back and forth, beyond the usual lines of demarcation between sound and song.

On Reboot, Hammill’s lyrics float untethered, serenely detached from the free-form improvisatory turbulence below. Often, as on Cash, their guitars present as opposing forces, locking horns in an argumentative wrangling around a belligerent, circular riff. It’s not all abstraction or experimental tangents, nor anywhere near as extreme as these players can be. Lucas’ agile finger-picking on The Kid and This Is Showbiz transposes knowingly shrewd takes on the fame game into what initially appears to be a John Fahey-like modal folk setting.

Elsewhere, disarmingly pleasant chords and balladic deportment disguise harder, more personal subject matter. Spinning Coins captures life-changing moments decided on the vagaries of chance, while Of Kith And Kin ponders the inevitable and remorseless thinning out of those we know and love.

Fans of Hammill’s always lucid observations should be assured that many of the songs forged in this partnership count alongside some of his best. The instrumental portions of Other World possess a rather reckless temperament, wherein darting figures abruptly shudder before ominous precipices. Not for nothing are there several references and allusions to the potentially perilous pastime of skating on thin ice. The calm in Built From Scratch, where a single plucked harmonic is left shivering in the wake of an acoustic-electric storm, comes at a price.

The degree of angsty trepidation which frays the edges of this music reminds us that just because artists get older, it doesn’t mean their desire to break out from expectation is any less diminished. Here, that outlaw instinct survives intact.