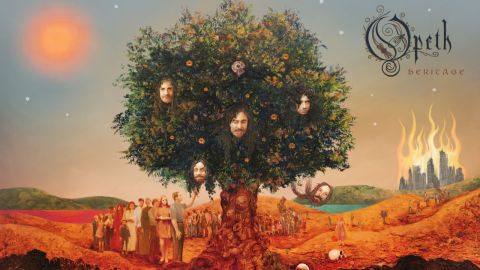 There’s a story that when Chinese Premier Zhou Enlai and US Secretary of State Henry Kissinger met in 1972, Henry asked Zhou what he thought about the French Revolution in 1789. “It’s too early to say,” replied Zhou. Right now, after living with Opeth’s new, tenth album, Heritage, for only a few days, it’s too soon – by several years – to make anything other than a few general statements: It’s good. It’s complicated. It will take some work to fully appreciate it.

First up, there’s no Coil or Ghost Of Perdition to hook you in. The title track, one of two moody instrumentals influenced by Swedish jazz and film music composer Jan Johansson, is slow and plaintive, a bleak and even off-putting intro. The first track, The Devil’s Orchard, is angular, fusion-tinged, a different kind of heavy. Only when we reach third track I Feel The Dark do we encounter a more familiar Opeth; a muscular tune, overlaid by clouds of Mellotron, twists of flute, vibes and an atmosphere of fear and trembling.

While there are a few anchors of familiarity throughout Heritage, it’s clear that this album is something very new. It is not, as some people have suggested, a continuation of Damnation. Damnation was mellow and tuneful. Heritage is anything but that. Heritage isn’t a happy record. Heritage finds the band and the listener well outside any comfort zones.

As has been widely reported, there’s little about Heritage that places it in the realms of heavy metal. Listening to the ethereal, Gentle Giant-coloured Famine or the Jethro Tull-like Folklore, you’d be hard pressed to even connect Opeth 2011 with Opeth the Swedish death metal band of even a decade earlier. This album is progressive rock in all the many usages of the term.

Heritage is a brave album. Obviously that might be bad news for the band’s label, because brave albums can often result in the shedding of some long-time fans. Brave albums don’t always sell as well as repackagings of the familiar. But that probably matters little to Opeth. It’s almost as though this was made to be a cult album, loved by only a few but loved very intensely by those few. It’s a difficult record, certainly, although we’re not talking Trout Mask Replica-difficult.

Heritage has set a new high bar for band, listeners and all would-be competitors. Everybody start jumping.