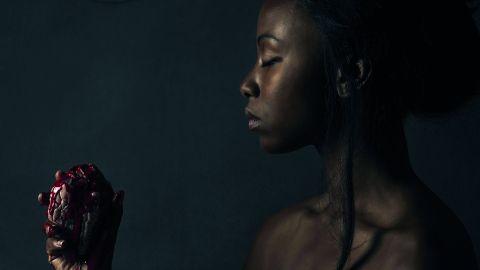 With second album Winter, Houston’s previously little-known Oceans Of Slumber announced their musical experimentation and Cammie Gilbert’s captivating vocals to the world stage. While it still holds up two years later, the album now pales in comparison to their latest, The Banished Heart, which finds ever more affecting ways to pull you into its 65 minutes of emotional turmoil. Ostensibly drawing from the north of England’s Paradise Lost/My Dying Bride/Anathema axis of the early 90s, but shattering any notions of what constitutes a genre, every song weaves all manner of styles and ideas into its absorbing narrative. Blasts of drums erupt underneath mellow guitars one minute, subtle electronics navigate shattering riffs the next, never retreading the same ground. Opener The Decay Of Disregard traverses all manner of ridges and deep ravines as it pushes into every corner of the conscience while Etiolation anchors a plethora of tech metal bursts as it maintains its soulful identity.

On musical terms alone, all this is enough to strip you defenceless, but it’s when Cammie envelopes the music in her gorgeous, melancholic voice that you realise you are on a soul-searching voyage. After towering pillars of death metal, At Dawn descends to evoke the same haunting beauty that Chelsea Wolfe and Myrkur enthralled the metal world with in 2017, while the fragile piano-led title track rises from Tori Amos’s naked vulnerability into cinematic grandeur. Yet it’s the simplest track, with the equally emotive voice of Evergrey’s Tom S Englund trading off with Cammie over repetitive, despairing riffs, that leaves the longest, most cathartic impression. Born of personal loss and anguish, The Banished Heart is an achingly honest masterpiece fraught with both upheaval and hope that connects both band and listener to a primal sense. Yet crucially, its individualism and boundary-altering bravery is progressive in the truest sense of the word and ultimately impossible to resist.