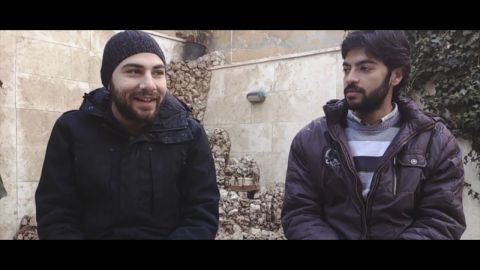 Under threat from a religiously oppressive regime while living inside a literal warzone, Monzer’s situation, like much of the fragile underground Syrian metal scene, is desperate.

He was inspired to make the film after a close friend of his was killed, exchanging his guitar for an assault rifle in the struggle against Isis. The footage, rough-hewn, is shocking.

The film begins with Monzer visiting a friend in the village of Hama only to find it devastated by a suicide bomber. Later, we follow him as he visits the band Chaos in the decimated northern city of Aleppo, where they can’t practice until the power in their shrapnel-peppered apartment comes on – if they can find some fuel for their generator. But first, there’s a street they have to cross, watched by an Isis sniper.

The footage is shaky as they run, the camera hidden in Monzer’s coat. He’d doubtless be arrested for filming this moment. In fact, that the film exists at all is a miracle; Darwish smuggled the footage out of Syria, almost drowning in the process as their dinghy sank during their crossing from Turkey to Greece.

He now lives in the Netherlands, his film his last remaining tie to a home he’ll likely never return to. Frustratingly, despite receiving its UK premiere at April’s World Metal Congress, Syrian Metal Is War doesn’t yet have a distribution deal.

It should be a mandatory watch for everyone, not just metalheads: a rare insight into the devastation wrought by corruption and extremism, the plight of innocents caught in the middle, and a testament to the ability of this oft-maligned music to give a voice to the voiceless.