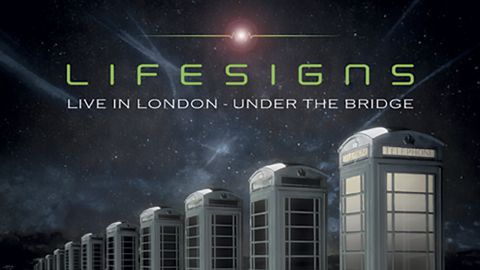 Masterminded by keyboardist/band leader John Young and sound engineer/producer Steve Rispin, Lifesigns’ glorious and well-crafted debut album piqued much interest in 2013. But could such polished studio artefacts be replicated live? Live In London – Under The Bridge proves that they absolutely can.

Packaged with two audio CDs of the gig, this DVD was filmed in January 2015. This Stamford Bridge club is by no means large, and the intimate surroundings are reflected well here, bringing the viewer up close and personal with the band. Every track from Lifesigns’ debut is featured alongside two reworked John Young Band tunes and three new songs, whetting appetites for futures releases.

Fresh tracks Different and Voice in My Head don’t perhaps grab attention in the way the older material does, but this is almost certainly a function of familiarity, as they grow in stature with every listen. That said, the other new one, Impossible, is undeniably immediate and accessible, and features a hugely catchy repeated refrain.

Testament to the skill and passion of a band on top form.

The cameras give us some nice perspectives on a band clearly enjoying themselves, including neat over-the-shoulder shots of John Young’s and drummer Frosty Beedle, who spends almost the entire show with a smile on his face, even when outrageously clattering around his kit at the start of Telephone. Bass player Jon Poole is in animated form too, bouncing around the stage and proving that Nick Beggs’ original parts hold no fear for him.

John Young Band selections Open Skies and the instrumental Kings fit very comfortably here. Ushered in by the jaw dropping guitar pyrotechnics of Niko Tsonev (a revelation throughout), closer Carousel is marvellously sweeping and majestic. With four guys on stage one might expect some sound compromises, but they’re bolstered by backing tracks, including various sonic textures and Thijs Van Leer’s flute, and it’s all pretty spot on – potentially problematic multi-part harmony vocals, for example, get dispatched without incident.

Extras-wise, there’s little more than the obligatory “behind the scenes” feature and a photo gallery, but no matter. One very nice touch is that all contributors to this largely crowd-funded project get name-checked within the enclosed booklet as well as in the credits at the end of the concert footage.

Ultimately, Live In London is as much a testament to the power of collective action as it is to the undoubted skill and passion of a band in top form.