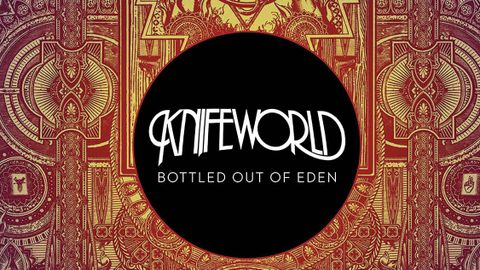 An inevitable consequence of getting older is that we begin to lose those near and dear to us.

Dedicated to the memory of several friends and colleagues, including Gong’s Daevid Allen, Knifeworld’s follow-up to 2014’s The Unravelling, celebrates those lives with a robust, boisterous roar. Marshalling a roiling, gleeful energy, there’s not a dull or slack moment to be found here, with every track bristling with a wry intelligence and keen sensitivity.

Knifeworld knit together their own gnostic rock, brimming with symbols and compulsive preoccupations. Ritual drones and invocations get the album underway with High/Aflame. ‘The Devil keeps a close watch on his entryphone/Waiting there for you to ring the bell,’ sings Kavus Torabi as it accelerates into a race between a whip-cracking beat, twanging guitars and galloping horns. Across the album, the lyrics, revelling in magical-realist wordplay, are like dice thrown into the winds of chance and probability. Confessional jump cuts, mystical allusions and tall tales alike are told with such urgency that it’s often only after they’ve gone by that it’s possible to sift through their after-images for meaning.

This is what truly progressive music sounds like in 2016.

Specialising in quirky interjections, brass and woodwind tiptoe and totter between the rhythm section’s playful push and shove and the keyboard embellishments, adding knotty texture and counterpoint to the lopsided march of The Deathless and the rowdy bray of I Must Set Fire To Your Portrait, the latter recalling Cardiacs’ belligerent zeal.
The word ‘genius’ is so overused as to be meaningless these days so let’s not bother going there when it comes to recognising Torabi’s achievements in Gong, Guapo and this awesome avant pop octet. However, his singular vision for a restlessly inquisitive sound, and ability to fuse glittering particles of pop, classical and rock into a seamless, dazzling interchange with each successive Knifeworld release, surely demand a wider acknowledgment and recognition. Benefiting from a clean production that allows the tiniest of details and the swaggering dynamics to shine, Bottled Out Of Eden is their most lucid and consistent album to date.

It comes down to what we want from our artists and their albums. As we get older, do we want the same old, same old and double albums that fit like an old pair of slippers? Well, sometimes that’s nice, but how about music that’s testing, that pushes us a little harder, that demands attention? If you want to know what progressive music sounds like in 2016, best not look to the mellotron-encrusted riffs beholden to yesteryear, which so many are keen to unload onto the public. Point your listening gear to Knifeworld.