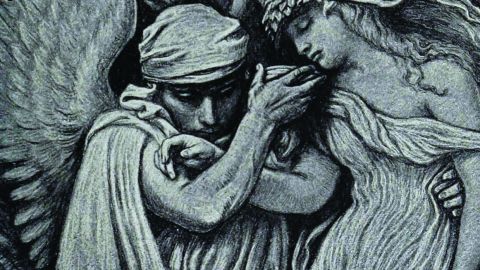 KingBathmat have been a regular, welcome presence on these pages over the years, as has their linchpin John Bassett, whose eponymous album, Unearth and his Arcade Messiah project have both received positive reviews.

According to its blurb, Dark Days was never really meant to be a KingBathmat album, but Bassett assembled a set of songs that fitted their style, and the name’s still a draw in niche circles. They’re down to two members now: only Bassett – who sings and plays all instruments here – and drummer Bernie Smirnoff remain. One senses a tale there, which could account in part for the jet-black tone of these five songs. The band’s trademark tunefulness is present, but there’s an ineffable, almost gothic dread lurking in the catchy title track, metallic Tis Pity She’s A Whore and sludgy Magnet To Pain. These amp up the rock and dial down the proggy pretensions, but the instrumental breakdown amid the nine-minute Feathers is as intensely melodic and intelligent as anything they’ve done. Nihilist’s shimmering, spaghetti-space-western intro guitars give way to one heartbreaking instrumental. Looking at these songtitles again, would someone just nip over to Bassett Towers for us and check the guy’s okay?