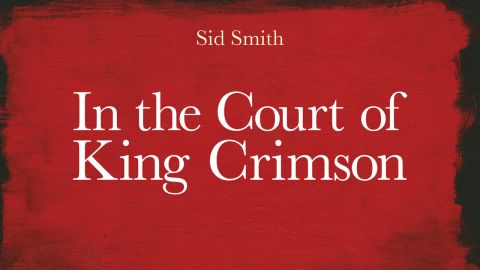 The first edition of this definitive King Crimson biography was published in 2001. Then they were touring the US, playing to scattered audiences at decent-sized theatres. Today, their 2019 Celebration Tour is selling out venues like New York’s Radio Music City Hall (6,000 cap), they headlined the Sunset Stage at the massive Rock In Río Festival, and newer artists from Mastodon to St Vincent proudly assert their singular music as an influence. King Crimson’s stock has never been higher.

What makes this expanded edition of In The Court Of King Crimson an exceptional, engrossing and complete read is the amazing access its author has. Sid Smith (of this parish and, no, he’s not paying me) first saw the band at Newcastle in 1972, some 20 years later he met Robert Fripp (not a man to suffer fools, as the book shows), who has since described Smith as ‘King Crimson’s historian’.

Drawing on interviews with all members of the band past and present, the book charts their 50-year career: their early roots (managers David Enthoven and John Gaydon are in this new edition and offer real flavour of the day), coming up to date with the recording of The Power To Believe, Jakszyk, Fripp, Collins’ A Scarcity Of Miracles and the subsequent tours. While this isn’t a musicological work, Crimson’s output is evoked and explained eloquently, with an illuminating track-by-track section that had me reading along while listening back to the Crim catalogue.

The numerous interpersonal relationships and skirmishes are presented with refreshingly little editorialising, as typified by the Fripp/Belew arc – from Belew being courted while in Talking Heads to the pair’s cringe-inducing disagreement about the band’s structure in 2017. John Wetton spoke to Smith in great detail in the years before his death, and adds some colour: “We had our fair share of sex, drugs and rock’n’roll.” He remembers touring with Crimson in the 70s, when “audiences were very tolerant because their edges were smoothed out by the haze that engulfed them.”

Small details delight (Bill Bruford learned to play the alto-sax while on tour to relax), and there’s a nifty, now-prescient connection between Bruford/Pat Mastelotto’s Double Duo and Crimson’s current drummer, Gavin Harrison. He, Mastelotto and Trey Gunn are among the valuable additions to the new edition, bringing fresh insight into what it takes to work in such a high-functioning outfit.

Authoritative, revealing, and just a damn good read, this is as close as most of us will get to The Court.