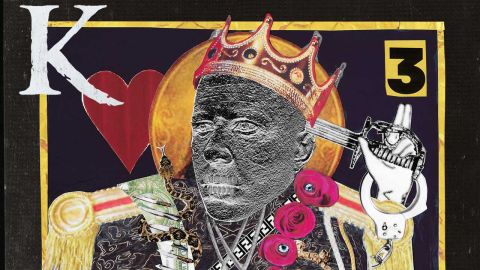 Three albums in and we really are nowhere near enough to knowing just what to really think about the divisive and controversial King 810. If their debut album, Memoirs Of A Murderer, saw the band being hyped to the point of exhaustion, its follow-up, La Petit Mort Or A Conversation With God, was cruelly ignored, despite it being a far more complex, interesting and dense album than its predecessor. Also, various line-up and visa problems mean UK fans probably feel that they haven’t truly seen the fully realised King 810 yet, so Suicide King has a hell of a lot riding on it.

Initially, you’d have to say that it seems the band might have blown it. The first half of the record is full of fairly unremarkable, standard fare that plays up to every negative criticism thrown at them over the years. If you are bored and appalled by the endless, overly aggressive gun talk and gangster strutting, then songs like A Million Dollars or Bang Guns will do nothing to win you around, despite having some real groove and some truly threatening grit to complement the message of the music perfectly. It borrows heavily from the early Korn blueprint - not strictly a bad thing, it just feels like a shame when the second half of the record sees King 810 step outside of metal’s comfort zone again. Maybe it doesn’t quite hit as hard as La Petit Mort… did with the experimentation, but album closer Sing Me To Sleep has a dreamy, robotic nightmare vibe, Wade In The Water addresses the Flint, Michigan water crisis using old blues and Tom Waits-esque dark crooning and album highlight Black Rifle is a piano-led ballad with a funeral stomp that recalls the gravel-voiced acoustic hip hop of Everlast.

King 810 can be a very good band, but there’s still a level of consistency and decision making that is stopping them from fulfilling that potential.