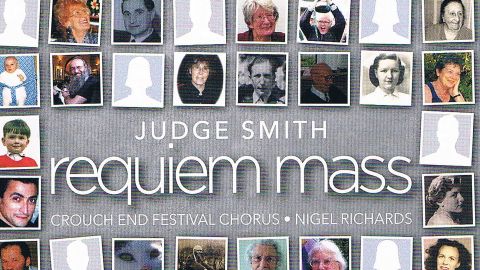 Founder member of Van der Graaf Generator and erstwhile collaborator with Peter Hammill, Judge Smith has also composed stage musicals and operas. He wrote the punk parody Gob On You for Not The Nine ‘O Clock News too, but this setting of the Latin Mass For The Dead is a far more earnest proposition. Written in 1975, it’s only now that he’s found the satisfactory marriage of musicians, finance and recording quality to make it happen.

It’s a startlingly grandiose half-hour piece, featuring the 50-voice Crouch End Festival Chorus, a rock quartet, orchestral percussion, trumpets, trombones and the baritone Nigel Richards. While at times it feels a bit – well, a lot – like being in church for a Songs Of Praise episode, at others the rock band get driving and the movements muster a wallop.

A very loose parallel would be one of Rick Wakeman’s 70s zeniths – but without the keyboard flourishes. And if it does come across rather worthy and bombastic – as a formal tribute to the deceased has every right to – the ambition is admirable. Somewhere between rock opera and classical elegy, this requiem is a mass of monolithic mournfulness. He’s realised a long-held vision: Amen to that.