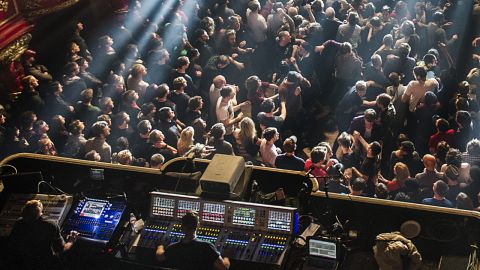 Ahead of their first Canadian shows in eight years, IQ provide London with an Easter treat by way of tonight’s Good Friday warm-up show. Those who have had the pleasure of seeing the band’s usual Christmas performances will know all about guitarist Michael Holmes’ penchant for some festive fancy dress.

To the disappointment of some, he resists the temptation to don a fluffy bunny costume for this particular occasion, and instead it’s with minimal fuss that we set out on The Road Of Bones with the album opener From the Outside In.

During the slowburn dark ambient intro of the title track, Holmes is nevertheless in a perversely playful mood. He uses his downtime to go for a walkabout into the audience, and to observe his colleagues from the punter’s eye-view. Together, we watch Peter Nicholls’ unsettling and detached portrayal of a serial killer, before the guitarist returns to resumes his position for the heavy, Tool-like denouement. This particular track and Frequency almost border on progressive metal, illustrating that IQ are definitely far from mellowing with age.

Soon it’s the singer’s turn to go walkies; he comically negotiates a toilet break with his band like a desperate child and makes his way through the throng to the little boy’s room at the back of the hall during the instrumental section of Guiding Light.

Neil Durant, meanwhile, is handling his role at the keys with confidence, reproducing Martin Orford’s parts perfectly while putting a stamp on the new material. Without Walls is a showcase for his skills and while the song falls short of older epics such as The Seventh House and Harvest Of Souls, it gives those warhorses a rest and keeps things fresh.

The whole of The Road Of Bones gets an airing tonight, plus the superb Constellations from the limited edition bonus disc. But to to the joy of the audience, IQ’s formative years are well represented, too, with the tracks Outer Limits and The Enemy Smacks – which, typically, steals the show.

Nicholls’ depiction of a drug fiend still has a disturbing, visceral and shocking power. His costumes reference familiar archetypes: they’re part Death from The Seventh Seal, part Phantom Of The Opera. Both this role and The Road Of Bones’ Hannibal Lecter-like killer make even Peter Gabriel’s darkest stage personae look somewhat tame. Such intensity is diffused thankfully by some more between-song joshing about relieving oneself, which is becoming the evening’s running (almost literally) joke.

Prior to final song, The Wake, a fan is welcomed to the stage to receive a T-shirt for making this her 100th IQ gig. This is the kind of band where loyalty flows in both directions, and their road hasn’t reached its end yet.