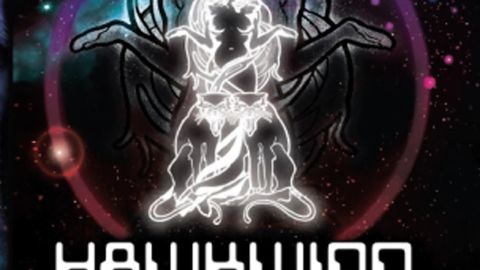 At the beginning of last year, Hawkwind played a show at London’s Shepherds Bush Empire in order to raise money for various animal charities. They played two sets, the clear highlight of which was a recreation of their classic live album, Space Ritual.

This performance, in turn, has been turned into another live recording (and concert film), confusingly available in three separate editions: double CD, double CD/single DVD, and double CD/DVD. It’s the Space Ritual half of the album that provides the main interest, and while the new version might not match the original for sheer, mind-warping intensity, it’s still a wild ride, and remains largely faithful to the 1974 release. Electronic No.1 has been replaced by A Step Into Space, and Robert Calvert’s poems are read by bass player Mr Dibs and (in the case of Sonic Attack by the disembodied voice of Shakespearean shouter Brian Blessed), but otherwise it’s familiar territory. Dave Brock’s guitar steers the ship, the bass churns, the theremin screams, spectral graphics fill the screen, and it’s the closest most of us mere mortals will ever get to barrelling through the galaxy at something like warp speed. Dancers Laura and Steph add a pleasing Blue-Peter-meets-early-Doctor-Who vibe, wearing costumes that appear to be variously made from matted hair, papier mâché and coat hangers, and former Soft Machine guitarist John Etheridge joins the fray to add muscle to Down Through the Night, Lord Of Light and Space Is Deep. A spiralling Orgone Accumulator and the doom-laden Upside Down are all highlights, but the climax comes — as it should — at the end: a single camera stays focused on the stage for a couple of minutes, before the band finally return for a joyous romp through Silver Machine (which is a pleasant surprise, given that the tune’s not listed on the cover nor on the DVD menu). As ever, it’s quite the cosmic ride – so put that in your pipe and smoke it!