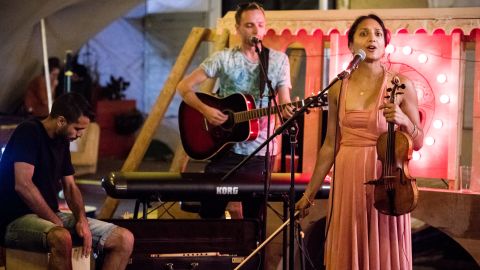 Woodburner, organisers of live acoustic events around London, are Prog’s hosts on this balmy late summer evening in Tottenham. Styx is a hip establishment with a makeshift DIY chic. Under a Bedouin tent, the wooden stage forms a bridge over a small stretch of water – a nod to the river that gives this arts space its moniker – and an eclectic young crowd have paid the ferryman a small fee to be transported tonight.

Flux are a four-piece with an unusual amalgam of instrumentation and styles. This is evident before they play a note. From right to left we have acoustic guitar, violin, keyboard and finally band leader Shammi Pithia poised at the mic with bansuri, a bamboo flute of South Asian origin.

A solo guitar intro mixes flamenco flair with Western classical guitar lines, immediately bringing to mind the maestro John Williams. As Night Tide begins to coalesce, so does that connection – the melting pot of styles is reminiscent of Sky.

The mournful tones of the bansuri aren’t a world away from the low whistle of Irish trad music, while Preetha Narayanan’s languid violin betrays her Indian classical studies. As a more rhythmic pulse intensifies, her energetic bowing recalls both Appalachian folk and Balkan gypsy dances, and Pithia swaps bansuri for sitting astride a cajón – a percussion box synonymous with Latin beats.

This is truly world music. The mix of ethnic styles could be coming from anywhere and nowhere – what Brian Eno and Jon Hassell termed ‘Fourth World’ or ‘Possible Musics’.

Horizon showcases a duet between bansuri and violin. Close your eyes and you could be hearing Ian Anderson rhythmically overblowing his flute, locked in a musical duel with Anna Phoebe. The more vibrant, propulsive material such as this and Piece By Piece, from debut EP Mirror, elicit the most applause.

The academic chops these musicians bring to their craft is foregrounded in these uptempo displays of fire, but how they co-mingle attests to their fine compositional skills. Such a cocktail of exotic sounds could easily fall into pastiche rather than these evocative and cinematic vistas.

Hush sees us sipping peppermint tea at Simon Jeffes’ Penguin Café Orchestra, a moment later spinning in a caffeinated dervish. Clearly the ironic title is there to wrong-foot the unwary traveller.

The set ends with Thirty Five, from Mirror. Again the perception is of East meets West. Polyrhythmic clapping forms an audio Rorschach test – to some this will sound like flamenco, to others it’s a Steve Reich homage.

Too soon it’s the more banal journey of the Victoria Line that beckons us, but with upcoming shows in the South Bank and Kings Place, Flux are definitely going places.