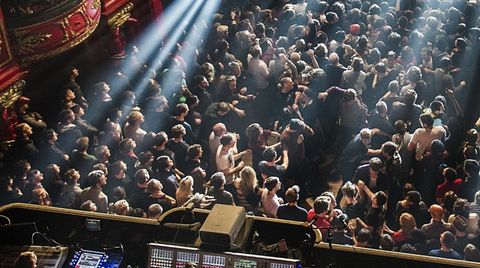 Although sound gremlins are determined to reduce TEMPLES ON MARS’s [7] muscular, eclectic rock to fuzz, the power of the riff wins out. Tonight is their debut show and, with a pummelling sound that falls somewhere between myriad bands including Thrice, Leprous and Mastodon, there’s much to be excited about. Serving up Tesseract-esque tech that merges expansive melodies and ephemeral rhythms drenched in prismatic textures, VALIS ABLAZE [7] are a captivating prospect. This is a show on home turf for EXIST IMMORTAL [8] and frontman Meyrick de la Fuente looks overjoyed as he surveys the packed room. Annoyingly, the sound gremlins have returned and there are moments when his clean tones are lost in the otherworldly mix of astral atmospherics, juddering guitars and bloopy solos. It’s a bummer on the likes of Follow Alone and Erode, where killer hooks are a crucial aspect of their brocaded melo-tech. What we can hear sounds glorious, though; the futuristic sonic tapestry transcends the technical issues, an ethereal delight that transports us to a higher plane.