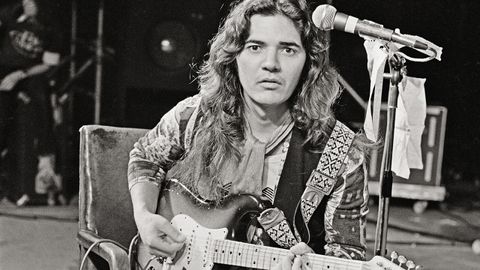 From tapes recorded for the syndicated US radio series King Biscuit Flower Hour, this album delivers the full 90-plus-minute set from February 27, 1976 (plus three songs from Springfield, MA, a month earlier). It is, then, from Deep Purple Mark IV’s lone US tour in support of the line-up’s sole studio album, Come Taste The Band.

This repackages the tapes for a third official release but remains valid because while the band are held together by the eternal brilliance of Jon Lord and Ian Paice, it’s the jazzier stylings of ex-James Gang member and Billy Cobham sideman Tommy Bolin that steal the show.

This despite the bluesy presence of David Coverdale (back when he could really sing, although his high notes here are sometimes strained) and Glenn Hughes. The toppermost pitch of the then cocaine-addicted Hughes is technically impressive but 40 years on, we should admit that so too is the impact of a dentist’s drill on a polished wooden surface. So let’s accentuate the positives…

That chiefly means Bolin – an American controversially replacing Ritchie Blackmore, and who would die of a drug overdose seven months later – and a radical setlist. After Burn, Purple play half the new album and just three from the Mark II heyday. Although they take up a third of the running time, much has changed. Smoke On The Water segues into Hughes singing Georgia On My Mind, the soul classic made famous by Ray Charles. How un-Purple is that?! Lazy showcases Lord’s evergreen Hammond work, but is uncharacteristically marred by synth updates. Even the encore Highway Star is only vaguely like the Made In Japan version.

More importantly, Bolin really stretches out, painting everything with his unique flourishes, unconcerned by what hardcore Purple fans might expect. After Paice’s stunning solo, he leads the band though Homeward Strut, an instrumental from his own album Teaser, and prior to a thunderous set-closing Stormbringer delivers – with the merest smattering of support from Paice – a panoptic 10-and-a-half-minute solo that could bend spoons.

He’s more subtle on This Time Around/Owed To G (a lovely change of pace dedicated by Hughes to “a friend, Stevie Wonder”) but turns stylishly brutal again by covering blues standard Going Down.

True, Purple are usually better with Gillan but, as Steve Morse has shown, not always with Blackmore. This album proves that when Bolin was on top of his game, they were very special too.