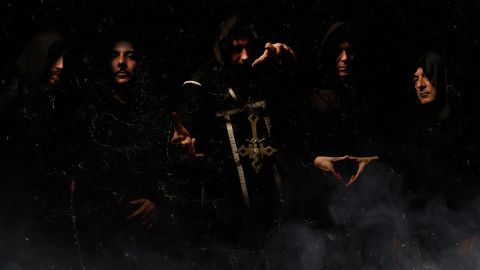 Daemon is the first album in Mayhem’s incendiary canon to be written by the same line-up as its predecessor. While Esoteric Warfare, which was largely crafted by guitarist Teloch, saw Mayhem explore the outer reaches of warped technicality
and discordance, their new album, a more collaborative affair, is built upon resoundingly spacious, regal architecture.

Indeed, the recent anniversary shows for masterwork De Mysteriis Dom Sathanas appear to have influenced Daemon in terms of the arcane atmospheric grandeur of both records.

That’s not to say Mayhem’s sixth full-length is anything near a retread, however. In fact, there’s a modern vitality in juxtaposition to the early second-wave traditions that this legendary band defined, which is essential for a band like Mayhem to continue pushing forward creatively as an apex entity.

Throughout this near-flawless LP there are deep impressions that the band have been paying close attention to the sounds erupting from the underground this decade, from Behemoth to Mgła and Bölzer and beyond.

Such subsuming of outside energies from acts directly inspired by Mayhem’s sacrosanct texts is what makes this album such an immersive experience when tied to the idiosyncrasies of Attila’s multi-demon vocals, Hellhammer’s propulsive, forever-adroit drumming, Necrobutcher’s creepy bass tones, and the vast, shifting guitar interplay of Teloch and Ghul.

The record is paced perfectly, too, as the faster and more disorientating black metal ravages such as The Dying False King, Worthless Abominations Destroyed and Of Worms And Ruin are tempered by the axis-shifting slower malevolence of Agenda Ignis and the wretched grooves of Malum.

This is without question Mayhem’s most immediate LP to date, and yet there is zero compromise on their underground ethics – a standing testament to the seasoned skill and expressive artistry wielded by its creators.

Mayhem's latest release, Daemon, is out now on CD, MP3 and Vinyl via Century Media. Mayhem are set to begin their European tour on Halloween, with special guests Gaahl's Wyrd and Gost.

In 2019, Mayhem yet again reinvent on new album, Daemon."Mayhem will always be Mayhem," says guitarist/songwriter Teloch (aka Morten Bergeton Iversen) says. "If we put the genre game aside a bit, no one else sounds like Mayhem. Even when De Mysteriis came out, it was not at first considered to be a black metal album, if my memory serves me right. Tricky to label this band, metal would be the most fitting; it's not pure black metal in my opinion. Not sure it has ever been actually, despite what the general opinion is. People can call it whatever they want. If it's black metal to them, then fine. We don't really care. But to me it's important to keep some sort of black metal vibe at least."View Deal