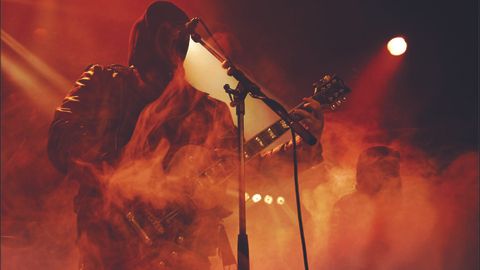 Northern Heritage have a reputation both for releasing some of the greatest black metal of the last 15 years, and for refusing to play the industry game.

So it’s not surprising that Mgła’s 2013 full-length, With Hearts Towards None, snuck out with barely a peep in the mainstream metal press, and took a year or so before people really started to recognise it for the masterpiece it was. This time the mysterious Polish horde (apparently it’s pronounced ‘mgwa’ and means ‘fog’ in Polish) disdained a fanfare for what has become one of black metal’s most highly anticipated releases. Could Exercises In Futility possibly match up to such an illustrious predecessor?

Thankfully, the answer is a most emphatic yes. The black-hooded Poles trade in a nihilism that is as bleak as it is compelling, and Exercises In Futility will no doubt attach itself to your soul like the facehugger from Alien. Again, the band eschew such mundanities as songtitles, the tracks merely numbered I to VI. Exercises In Futility I opens with the notion ‘The great truth is there isn’t one’ and six slices of hateful misanthropy follow, revelling in the utter pointlessness of the human condition – an icy, soulless Nietzschean void set to music. And what music! Taking the triumphant stride of Viking-era Bathory and latter Immortal, and tempering it with melancholic Slavonic despair of Drudkh’s Autumn Aurora, it’s the soundtrack for a glorious ride into battle in a beautiful valley… knowing you’ll be killed. Superlatives are the order of the day for what is, truly, a stunning record.

Sitting very much within the black metal milieu, Mgła make no attempt to be clever or arty; there is no trying to appeal to the mainstream, no nods to the avant-garde. For them it is very much a black (leather) and white affair; albeit under a vast grey sky. And indeed it is this sharp focus that is the strength of Exercises In Futility. They have in fact managed to outdo With Hearts Towards None: no mean feat. A stirring ride into despair and nothingness, this should be topping best lists come Xmas, but then Mgła wouldn’t be surprised if it didn’t.