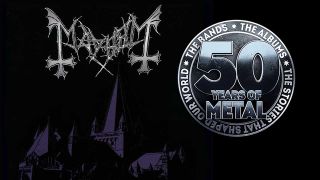 In the new issue of Metal Hammer magazine, we celebrate 50 years of metal. As part of this we asked 50 of today’s greatest metal stars to pick their favourite metal albums of the last 50 years. Joey Jordison chose Mayhem’s iconic 1994 album De Mysteriis Dom Sathanas. Here, Joey reveals how just how much it has influenced his life…

Joey Jordison: “I remember buying De Mysteriis Dom Sathanas a few months after it came out, and it was the equivalent of when I got Reign In Blood. It was such a hugely influential record on me and on music as a whole – it’s a blueprint for so much black metal.

”Of course, with the history of Mayhem and the tragedies that surrounded them, it’s more than just a record. It’s a book. It’s so tied in with the individuals who made it and the time when they made it. You’re not just listening to music, you’re listening to a lifestyle. It’s not just the riffs or the drumming or the vocals – it’s something more than that. It’s got an atmosphere that’s totally alien, absolutely engulfing. When you put it on, you’re instantly transported somewhere else.

The new issue of Metal Hammer, celebrating 50 years of metal, is onsale now. As well as the full list of the 50 Greatest Metal Albums Ever as picked by metal's greatest names, it features brand new interviews with Tony Iommi, The Fever333, Gojira and more. And if that wasn't enough, it also comes with a free double-sided Iron Maiden poster and free Metallica beer mats. How cool is that? Order your copy here.