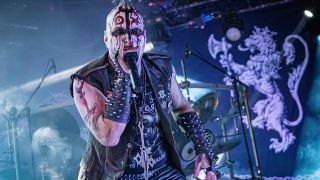 Mayhem have revealed the title, tracklist and cover art for their upcoming sixth studio album.

It’s titled Daemon and, as previously reported, will be released on October 25, after the Norwegian outfit signed a new deal with Century Media.

Speaking about the follow-up to 2014’s Esoteric Warfare, guitarist and songwriter Teloch, aka Morten Bergeton Iversen, says: “Mayhem will always be Mayhem. If we put the genre game aside a bit, no one else sounds like Mayhem.

“Even when De Mysteriis Dom Sathanas came out, it was not at first considered to be a black metal album, if my memory serves me right. Tricky to label this band. Metal would be the most fitting – it’s not pure black metal, in my opinion. Not sure it has ever been actually, despite what the general opinion is.

“People can call it whatever they want. If it’s black metal to them, then fine. We don’t really care. To me, it’s important to keep some sort of black metal vibe at least.”

Daemon’s striking cover art was created by Italian designer Daniele Valeriani, who has previously worked with artists including Lucifer’s Child and Dark Funeral.

“I think this album will be most pleasing for old and new fans,” adds Teloch. “As most of our devoted fans know, Mayhem has never released two albums that sound the same. That’s the case this time around as well.

“As I said, we simplified stuff, but at the same time tried out some new stuff to keep it interesting for ourselves and, also for our fans that dig that we are doing something new on each album.”

Pre-orders for the album will begin on August 30, with format details to follow in due course.

Mayhem will head out on tour with special guests Gaahls Wyrd and Gost across Europe later this year.