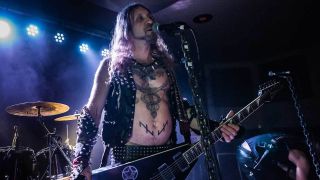 Couched in all the tributes to Lemmy after his passing wasn’t just the mourning of one man, it was the mourning of an unruly, wilful sensibility that stood in defiant contrast to the snivelling, pragmatic nature of our current era. Horizons are shrinking, the music industry has become more of an assault course than a playground, and to navigate the uncertain new terrain takes caution and calculation, a tailoring to expectations that offers merely a gossamer veil on the uncertainty that haunts us all.

Lemmy didn’t give a fuck, which is fine to say from a distance, but it was the experience that mattered. Not giving a fuck was the was in the very fibre and phlegmatic thrust of Motörhead’s music, and Motörhead’s music was inseparable from the approach to life of the men who made it.

Both Deströyer 666 and Bölzer, tellingly umlauted bands with frontmen uprooted from the hardy terrains of Australia and New Zealand respectively, not only offer their own tributes to the great man himself, they prove that that sensibility is still alive and well if you know where to look for it, and if you’re willing to get your fingernails dirty and fists raised.

Nambucca, unsurprisingly, is rammed. Dip your toes into London’s underground metal scene and you’ll find a close, dedicated and welcoming community who’ll turn out in their many hundreds for talismanic bands such as Mystifier and Mgła, and for whom Bölzer have become a byword for mind-melting, occult-steeped exploration.

Featuring just two members and fronted by the imposing figure of KzR, his armour-plate tattoos covering almost all his upper body but now resplendent in a Lemmy-style ‘tache and crooking his neck up into a downturned mic, Bölzer’s music is an alchemical reaction. Formed from the most dirt-ridden of matter, it’s transformed through a 10-string, splitter-fed guitar into a writhing, snaking current that races through your synapses as if it’s carving out new neural pathways. Instructed by alternately blasting and pounding drums to suddenly shift tempo and line of attack. It’s exhilarating on both the most primal and cerebral of levels, and for all the fierce innovation, the shock of crossing a threshold, it’s also a shock of recognition. Bölzer have an unconditional fervour and unwavering force of intent – not to mention the most irrepressible of grooves – that makes the arcane immediate, and has a habit of ensnaring anyone, no matter where they come from on the metal spectrum across their even horizon.

“That was everything I’ve ever wanted from a metal band,” says a passing Dan Knight from Messenger and Bölzer initiate, but it’s a reaction they get wherever they play, and why pretty much every festival on planet metal (barring the more circumspect UK, sadly) has been clambering to book them.

By the time they’ve rampaged through a cover of Iron Fist, Deströyer 666 have already driven the crowd to state of battle-primed delirium, but as with Bölzer this isn’t homage so much as a setting of co-ordinates to channel a perennial force into something entirely your own. Pretty much the stormtroopers for the sulphur-stained community of bands that includes the likes of Watain and the late The Devil’s Blood, the now London-based black/thrashers have always taken the most muscular, unleashed and consequences-be-damned approach to heavy metal. That frontman KK Warslut follows Iron Fist up by introducing the barbed-wire whorl of Live And Burn as “The story of my life” is more proof that D666 are a world away from the Facebook-surfing-backstage nature of modern metal, each song an anthemic, raging pyre fuelled by a hedonistic force of will you simply can’t fake, that has the pockmarked texture only genuine, hard-fought experience can imprint. As much as their lineup has changed over the years, Deströyer 666 look and sound like a gang, that outlaw, against-the-world aura adding an unstable, steroid-injected charge to A Breed Apart and the glorious, ultra-catchy and spittle-flecked litany of Hounds At Ya Back.

Heavy metal’s essence has always been an instinct, a refusal to hedge bets, second-guess or heed anything other than your own driving force. Which is why Bölzer and Deströyer 666 for all their incendiary zeal and hyper-alert thrust, feel like a celebration, and something liberating only heavy metal can give when it both finds its co-ordinates and threatens to lose them altogether. Somewhere, it’s not hard to imagine that Lemmy would approve.