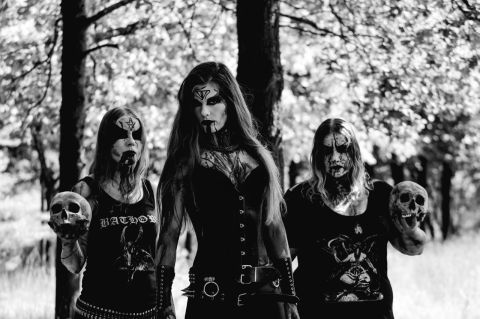 Occasionally you might discover an album that is so cosmically transcendent and so deeply evocative that it changes the way you see music. In these rare and revelatory moments, you’ll experience it as a profound psychic communication that resonates long after the music ends. Many are sure to enter this cryptic realm through the nine-track black metal odyssey that is Dawn Of Infinite Fire.

The follow-up to Asagraum’s 2017 debut, Potestas Magicum Diaboli, Dawn Of Infinite Fire sees the Dutch duo (who feature a third, live member) paying reverential tribute to the Satanic black metal of the 90s. It’s both a ritualistic homage to that movement’s ragged spirit and a devastating modern update.

Roaring with frosty blackened riffage and a siege of blastbeats, tracks like Abomination’s Altar and Hate Of Satan’s Hammer elevate the old Norwegian style with electrifying potency, and the pace never relents. With her dizzying volleys of tremolo picking and demoniacal shrieks, vocalist/guitarist/bassist Obscura has conjured an immersive sound that’s darkly compelling.

Thankfully, Dawn… sidesteps the by-numbers formula that others have followed to lacklustre effect. Top to bottom, each track erupts with a raging vitality and, within the confines of traditional black metal, an impressive array of modes and styles.

Beyond The Black Vortex forges a blasphemous alliance between the opening creeping atmospherics and the maelstrom of chaotic riffs that drive the song to its neck-snapping conclusion.

Closer Waar Ik Ben Komt De Dood (‘Where I Am, Death Comes’), with its duelling clean and BM vocal styles, strikes a captivating balance between its sorrowful melodies and the terrifying potency of the fretwork.

Mention must also be made of both the powerhouse production and the jaw-dropping precision of A’s drumming. Teeming with exhilarating riffs, ambitious songwriting and highly technical musicianship, Dawn… succeeds at every turn. An instant classic.