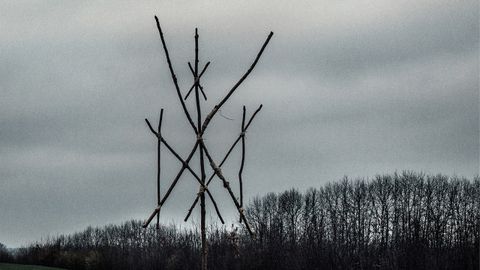 Given that Wiegedood’s members are from forward-thinking, experimental bands Amenra and Oathbreaker, the music they make in this incarnation is starkly traditionalist and intensely focused by comparison. This is coruscating black metal that prioritises groove and intensity. De Doden Hebben Het Goed III, unsurprisingly, forms the final part of a trilogy that laments the loss of a friend. Prowl is a brazen opener, a predatory groove over schizophrenic percussion. Doodskalm’s skittish chaos and shrill exhortations see rapacious speed tussling with piercing licks. The title track, which translates as ‘the dead have it good’, is a 12-minute, undulating riffscape, ever increasing in ire unto bullish closer Parool, all hissing cymbals and shunting, mesmerically ill-tempered riffing. De Doden Hebben Het Goed III succeeds as an effective summation of its predecessors: a ceaselessly anguished, punishing listen, that despite its overall lack of sonic variation prevails by sheer force of will.