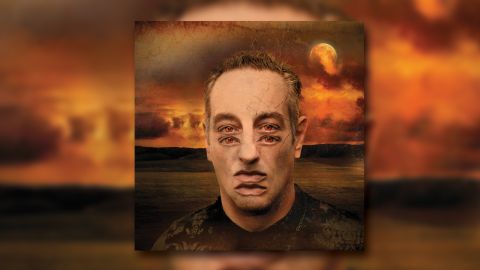 The ninth album from Arena finds the quintet on bold form with a studio album that captures the energy of their live shows. Double Vision might be the heaviest album of their career – it certainly packs more weight than its two closest predecessors, 2015’s The Unquiet Sky and The Seventh Degree Of Separation from 2011. Instead, this feels closer to Contagion and Immortal? from the early 2000s.

Production duties are shared between keyboard player Clive Nolan, drummer Mick Pointer and guitarist John Mitchell, with the latter handling mixing and mastering, and the results of their combined efforts are hugely impressive. There’s never a moment where the sound becomes cluttered, even when the band are really giving it some welly. Instead, every instrument has its own space in the mix.

The opening Zhivago Wolf starts with Mitchell laying down a meaty riff over Pointer’s cascading tom-toms, before the sound opens up to make room for Paul Manzi’s mighty voice to take centre stage. The Mirror Lies is a slab of keyboard-led symphonic rock punctuated with stabs of heavy metal riffage from Mitchell. Scars begins as a power ballad, with Manzi pleading, ‘Help me to find a way to talk to you,’ but it all kicks off when Mitchell steals the spotlight with an incandescent extended guitar solo that’s positively loaded with drama.

Paradise Of Thieves asserts its prog credentials with its odd time signatures and, as much as Arena emerged from the 90s neo-prog scene, this is one of several songs that harks back to the heydays of Uriah Heep and Deep Purple.

Red Eyes is a standout, with Nolan’s keys playing against Mitchell’s hefty riffing and a seriously catchy hook in the chorus. The organ sound lends the track a hint of the late 60s when bands like Vanilla Fudge and The Nice bridged the gap between psychedelia and the birth of heavy metal. The acoustic guitar that leads the way into Poisoned provides a breather after the intensity of Red Eyes, while there’s a touch of Ian Gillan in Manzi’s vocals.

Opera Fanatica from Pepper’s Ghost, and Moviedrome from Immortal? have shown that Arena have never been afraid to tackle ambitious, long-form compositions, but they really stretch their wings here with the seven parts of The Legend Of Elijah Shade. It’s rather glorious, chock-full of bombast and operatic grandstanding. Fingers crossed they’ll play it live.

Arena might not be prog’s most prolific band with just nine studio albums across 23 years, but Double Vision proves the importance of quality over quantity.