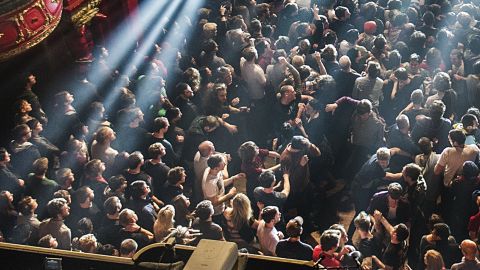 Off the back of their excellent comeback album Bronze Mystic, they’ve honed their tight, electronic- inspired math grooves to a nearly weaponised degree, and the number of punters here to see them tonight is nearly equal to those down to see the headliners. it has to be said that the larger stage and venue suits their somewhat maximalist sound, and perhaps gives a taste of the ambitions the band might have.

Blasting out of the gate with the relentless Search:Party:Animal and groove-driven riffage of S Is For Salamader, And So I Watch You From afar are not messing around.

With their new album The Endless Shimmering representing something of a return to form after a hit-and- miss last LP, their set finds newer songs sitting better than ever with their back catalogue. The hypnotically cyclical Terrors Of Pleasure and powerfully heavy dying Giants are right at home with percussive earlier cuts like BEAUTIFUL UNIVERSE MASTER CHAMPION and Like A Mouse, and make tracks like Wasps from Heirs seem somewhat flat by comparison.

In terms of sheer intensity, the track from the new album that really strips the paint from the venue walls is a Slow Unfolding Of Wings, with its hurricane-like intro seguing into a disorienting, eye of the storm verse section and back again. Guitarists Rory Friers and Niall Kennedy are enjoyably energetic to watch as they flail around and bounce riffs off one another, but it’s the monolithic rhythm section of Johnny Adger on bass and Chris Wee on drums that really ties the performance together, with huge half-time feel grooves driven by punk aggression.

As has often been the case, the band hold back a couple of their most intense tracks for last. Fan favourite first album stormer Set Guitars To Kill is used to announce their encore, while Big Thinks Do Remarkable ends the night by kicking over the table once and for all: there’s a huge mosh pit and a few crowdsurfers as the audience blow the last of their energy along to its facemelting crescendo.

It would have been good to have also heard the title track from Gangs, as its frenetic, upbeat main riff and extended, atmospheric middle eight work exceptionally well live. But that’s a minor complaint about a set that was otherwise pitch-perfect in terms of keeping new fans happy while throwing older fans a bone.