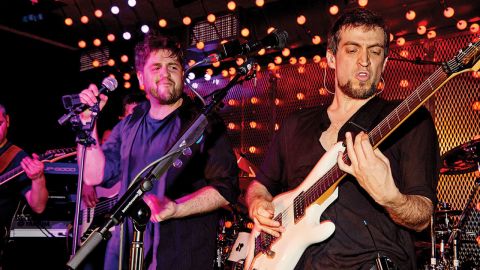 It’s a chilly Sunday evening, one day before Halloween, and this Camden venue is unusually quiet. A small but loyal smattering of fans are gathered to watch Godsticks launch into the multi-faceted opener Ruin.

“This the first of about 500 guitar changes… it is prog, after all!” frontman Darran Charles tells the compact audience as he swaps guitars one song later. It’s been just over six months since the Welsh four-piece were last in London but there’s a hint of nervousness in the musician’s voice tonight, and Prog wonders whether this could be related to technical issues. Although The Camden Assembly has recently undergone major refurbishment, there’s something not quite right with the sound and Godsticks’ heavy, layered groove is sucked into the room; the subtle nuances and guitar gymnastics from last year’s Emergence compressed into a grungy mess. It’s a real shame as the band are clearly putting their all into the performance and they exchange worried looks.

Not all is lost, though, because every now and again, Charles’ nimble-fingered arpeggios sparkle like diamonds through the mud and briefly lift the set. Godsticks still aren’t as well-known as they deserve, but here’s hoping that things are a little cleaner for next year’s tour with The Pineapple Thief.

Aisles, however, have come prepared. It’s the first time the headliners have played in the UK, and they’re not about to let potential sound issues get in the way of their show, so they’ve brought their own sound desk. It sits conspicuously in the centre of the room taking up almost as much space as their sparse audience. Once they begin, it becomes clear why they’ve gone to such great effort; their sound is flawless.

In the 15 years since they formed, the Chilean six-piece are still making new fans and their super-tight performance tonight – the last date of their rescheduled European tour – is a prime example of why. Their spot-on melodies, slick showmanship and classic sound peak on songs like the atmospheric CH-7, which is taken from their current concept album Hawaii. This impressive rendition is augmented with neo-prog harmonies and immaculate modern programming, earning it a very warm response from the skimpy audience. Vocalist Sebastián Vergara’s passionate delivery is worthy of a larger spacee.

Later, Aisles’ guitarist Germán Vergara gets everyone’s feet tapping along to the Latino-inspired mid-point of the experimental The Maiden. There are smiles all round as his rhythmic flourishes shift back to neo-prog perfection. In fact, tonight’s only disappointment is that there aren’t more music fans here to witness this band’s magnificent UK debut.