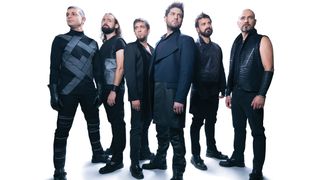 Four albums in, and Aisles have world domination on the brain. It’s fair to say the sextet are already big fish in their home country Chile, and with their new record Hawaii, things are decidedly outward-looking.

“We’re still trying to reach more people with our music,” admits guitarist Germán Vergara. “It’s our intention for Hawaii to be listened to by a global audience.”

It’s a tad ironic, then, that the band’s new record is a two-disc concept effort essentially penned about the destruction of Earth.

It’s an engrossing evolution from Aisles, whose eclectic neo-prog styling shares parallels with everyone from Marillion and Genesis to Spock’s Beard and Gazpacho, gradually securing them a loyal, burgeoning fanbase over the last 15 years. But they’re hungry for more. Lucky, then, that Hawaii has all the chops and chutzpah to merit Aisles’ latest gung‑ho international charge.

Opener The Poet Part I – Dusk immediately catapults the listener into quick-fire Neal Morse-esque adventurism, but for every full-bodied lick or fusion-fuelled drum attack, there are atmospheric musings or melodic majesty. It’s Aisles’ most ambitious piece of work yet, and like all the best concept albums, it’s glossed with an overarching, enchanting narrative that takes the listener by the hand into other‑worldly realms.

It’s music for the imagination. We write to convey feelings and to mentally take you somewhere.

“It’s a story about a group of humans that are able to preserve the human race and other species, and also the human legacy and cultural, scientific heritage of the world,” says Vergara. “But it’s a dark album because it’s about the destruction of Earth. As a result, all of the things that happen in the album are in the context of the future, like the year 2400 or something.”

“When you read the lyrics and hear the music, you go back and forth,” adds vocalist – and Germán’s brother – Sebastián Vergara. “You go 100 years, 50 years back, so it’s a very interesting concept.”

The tunes underpinning the plot are similarly cinematic, journeying through peaks and troughs, light and shade. “It’s music for the imagination,” Germán says. “We write to convey feelings and to mentally take you somewhere. It’s very eclectic too. It varies in terms of genres and styles of music.”

Hawaii took just over one year of “hard, hard work” to write and record, with 10 days spent in a retreat-style studio 40 kilometres away from Santiago to immortalise their ideas into album form.

“It was a very interesting and pleasing experience, to be together recording music and staying in the studio,” Germán says. “It was in the countryside, so it was an ideal situation to record an album about space and the future. We were in the country without any distractions or city life.”

Aisles first formed in 2001 from a collective of school buddies, neighbours and family in the Chilean capital Santiago. In fact, there were three brothers from the Vergara clan anchoring the group until keyboard player and older sibling Luis called it quits in 2010.

“We had a piano in our parents’ house when we all lived there, and we spent any free time we had with the piano writing music,” Germán recalls.

The band members bonded over a wide-eyed love of old school prog and rock, with Yes, Rush and Queen all acting as linchpin inspirations.

Debut album The Yearning was birthed in 2005, before In Sudden Walks followed in its footsteps four years later. Their last effort, 2013’s 4:45 AM, brought Aisles further into international focus.

The band’s rise was an organic one, despite the six-piece being marooned thousands of miles away from more traditional prog hotspots like the UK and mainland Europe, as well as the US. “It was hard to make an impact at first,” Germán admits, “but to be honest, from the first album, we got very good reviews. Without the support of a label or anything, we started sending this album to a couple of contacts, and immediately there were rave reviews.

“There is a prog scene in Chile, but it’s a very small country, with 17 million inhabitants, so it’s not big enough for us to be touring in. But we’ve had Steven Wilson filling out theatres, playing three nights in a row, and Marillion come to play here a lot.

“Chile being a small country makes it hard for us to be able to make it here, so we’re focusing our energy on playing abroad. We would love to go to the US and Japan.”

It was the critics that first slapped the ‘P’ word on Aisles, and it’s a genre classification that seems to have stuck like glue ever since.

“I personally like the definition of art rock,” counters Sebastián, “because it’s more open.”

And his brother seems to agree. “I’m happy with the prog tag, but sometimes we feel a little bit uncomfortable with the fact that it’s a little bit enclosing, or defining. But in a way, prog is a style that allows you more freedom. In the broad sense of the word, progressive is something that is forward-thinking, and you can create anything if you’re making music in a forward-thinking way, so maybe it’s a style that is defining itself over and over.”

Also among the inspirations ricocheting around in the group’s collective psyche are the Pat Metheny Group, Mahavishnu Orchestra and Radiohead, as well as classical music. It’s a veritable melting pot, and the band’s sound is all the better for it.

“When I was 11 years old,” Germán says, “I was really impressed with music from Queen. When I heard the guitar sound of Brian May, it had a big impact on me, and I started dreaming of playing the guitar.”

Behind the myriad of influences and vivacious versatility, however, are two things at the essence of Aisles: the songs and the emotion. The band aren’t technical for the sake of being technical – that would detract from the power of the message, the story.

“The idea behind the music is to write very emotional music – music that touches you,” Germán says. “I think that’s what defines us. Music that is able to shake you, emotionally or musically.”

We’re still trying to reach more people with our music. It’s our intention for Hawaii to be listened to by a global audience.

“The most important part for me is the emotional part, and the natural feel,” Sebastián adds. “I’m not so good myself at rhythms and everything, so I think my contributions are more in the emotional and melodic side than the… difficult side.”

It’s this bridge to the heart and soul that has endeared Aisles to many on the live circuit. Their shows are cinematic and atmospheric, with lighting used to add even more sensitivity to the music. However, being based in Chile means that touring and travelling is costly, and time-consuming. With a European tour originally mooted for the spring postponed after the tragic terror attack at Brussels airport in March, Aisles’ live plans were left stunted.

The tour has been rescheduled for October and November, and it seems the band’s trajectory in the continent – and elsewhere – looks set to continue rising. After one and a half decades, the group have reached the point where other bands with less steel and grit would have called it a day. But not Aisles.

Even if they aren’t shifting thousands upon thousands of records, it’s the praise from listeners across the world that makes things especially worthwhile.

“Our music is listened to in Europe, in Japan, in the US,” Germán reflects. “We’re very happy because we have a growing audience. It’s a cult following, it’s not massive – we’d like more people to hear our music – but we’re happy with how it’s going. More and more people write emails to us saying that they really love the music, and it’s something that makes you feel great.

“If we don’t have commercial success now, it’s not a problem as long as we get some feedback from people saying that they love our music or that it changed their day or week. That makes us very happy. I think people will value the work that has been put into the album, especially if they try to understand the lyrics and see the artwork.”

As Prog concludes our conversation Aisles’ Vergera brothers get back to their lives a million miles away in Chile, back to promoting their fine new record Hawaii ahead of a run of shows in Europe.

And then maybe the whole world domination thing isn’t so unrealistic after all.