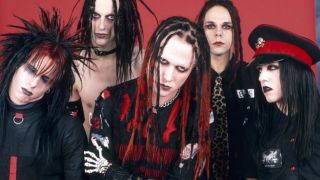 Wednesday 13 has spoken exclusively to Metal Hammer about a possible Murderdolls return.

He said last year that he’d welcome a reunion with the band’s co-founder Joey Jordison if it was something fans wanted to see.

And he’s checked in to say playing Murderdolls live shows is a possibility – but not in the near future.

Wednesday 13 tells Metal Hammer: “Murderdolls at the moment is the same as it’s been since 2011 – there hasn’t been any conversation between Joey and I. I just tell everybody, ‘From what I hear through the grapevine, Joey is possibly interested in doing Murderdolls again at some point.’

“If it does happen then it will probably be in 2019 because this year and next year with my record I’m going to be touring non-stop. I’ve got my year pretty much booked.”

He continues: “But I think the idea of us doing something in future and doing shows would be a great idea. I don’t see why we couldn’t. In my mind, if we did anything first it would be a couple of shows or some festivals.”

Wednesday 13 adds that one of the reasons he’d like a Murderdolls return is so they could play material from 2002’s Beyond The Valley Of The Murderdolls as they didn’t have a proper opportunity to promote the record at the time.

He says: “Just to get out, do some shows, and play those songs first before we even think about a record is where my mind is. The band’s been around 15 years this year – it’s kind of classic at this point. I would love to have Murderdolls be something I do on the side here and there, and Joey has his own projects that keep him happy, but why not do it on the side?

“If there’s downtime between us in our schedules and we can work it out, I’m sure it’s going to happen. It took eight years for the last one, so 2019 will be another eight years. I’d say 2019 we’d talk about doing some shows.”

Last week, Wednesday 13 released a video for his track What The Night Brings from his upcoming album Condolences. It’ll launch on June 2 via Nuclear Blast.

He’s just wrapped up live performances in Australia but has further dates planed over the coming months.