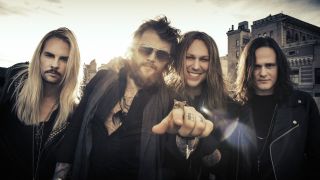 We Are Harlot have unveiled Never Turn Back, taken from their self-titled debut album, which is out on March 30. The band, fronted by former Asking Alexandria vocalist Danny Worsnop and featuring former Sebastian Bach guitarist Jeff George, have previously released two singles: last year’s Denial, and Dancing On Nails, which came out in January.

“Never Turn Back was yet another song that started in that original batch of songs that myself, Danny and Bruno worked on back in 2011 when we lived together,” says George. “Originally it was called Rainmaker.

“We all love guitar driven rock songs and that’s definitely where this one resides. The driving rhythm and that four on the floor bass drum feel is of course a rock n roll staple.

“And we knew we wanted to incorporate some type of live call and response feel to the lyrics so that live we could engage the audience more, and you hear that in the ‘Get back-Get Back’ segments. This song was definitely created to be a big song live, but once we started recording it, it soon became one of everyone’s album favourites as it kicked just as much in the recording.”

We Are Harlot can be pre-ordered from iTunes and Amazon, with signed copies available from Roadrunner. The band play at Download Festival in June.