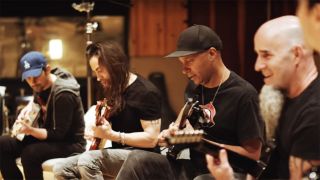 It’s the series everyone’s talking about, and as fans eagerly await the final episode of Game Of Thrones next week, Fender have released a video showing some familiar faces rock out to a unique take on the theme.

Not only does the video feature Tom Morello, Anthrax’s Scott Ian and Extreme’s Nuno Bettencourt, but they’re playing on a set of Fender’s Game Of Thrones-inspired guitars.

The trio are also joined by the show’s co-creator and showrunner D.B. Weiss and Game Of Thrones composer Ramin Djawadi, while American singer, songwriter Brad Paisley also joins in.

Check out the full video below, which also shows the musicians swapping ideas before launching into the theme.

Speaking about the collaboration, EVP of Fender Products Justin Norvell says: “This has been a two-year journey – much of it spent in the concept phase, nailing down a cool and authentic way to bring the two properties together.

“We worked directly and extensively with Game Of Thrones’ creator and avid guitar player D.B. Weiss to ensure that our vision, design and materials reflected the identity of each house.

“As existing fans of the series, we couldn’t be happier with the final results and this partnership overall.”

Back in 2016, Anthrax guitarist Ian was transformed into a White Walker, while Mastodon appeared in the series in 2015.

The Game Of Thrones season finale will be broadcast on HBO on Sunday, May 19.