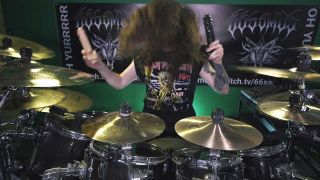 Last year, we posted a story about a man doing something weird on the internet.

The reaction to the gentlemen's phallic performance was instant, and huge. It became one of the most popular stories we'd ever published. It was a boner bonanza. A tallywacker triumph. A johnson jubilee. A whirlwind of well-received whangers.

To be frank, we hoped we'd never, ever have to publish such a story again.

But now he's back. YouTuber 66Samus has returned with a new pair of rubbery companions, and this time he's put them to work performing the drum part to AC/DC's classic Back In Black.

The video was made with support from 66Samus's Patreon followers, who, it would appear, actually pay money for this sort of thing. We salute them.

And we salute 66Samus. And his silicon sausages.