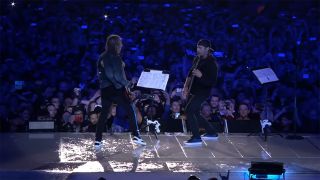 In what’s become something of a tradition at Metallica shows, guitarist Kirk Hammett and bassist Robert Trujillo regularly team up to play live covers while the band are on the road.

The duo like to pay tribute to artists who come from the cities or the countries Metallica are playing in – and at Berlin’s Olympiastadion on July 6, the pair delighted fans by playing Rammstein’s 1997 Sehnsucht track Engel.

While Hammett handled the chugging riff and solo, it was Trujillo who took the track by the scruff of the neck by playing a mean bass line and delivering the vocals.

Metallica have now released official footage of their performance, which can be watched below.

Trujillo, Hammett, James Hetfield and Lars Ulrich are still on the road on the latest European leg of their globe-spanning WorldWired tour. They’ll return to the US in September for two shows with the San Francisco Symphony Orchestra to celebrate the 20th anniversary of their landmark S&M live album.

Earlier this month, it was revealed that Metallica would release a children’s book detailing the band’s history on November 26.