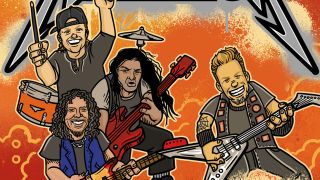 Metallica have announced they’re to release a book about the band’s history which is aimed at younger readers.

The ABCs Of Metallica will feature rhymes and illustrations and will detail the history of the band, and has been co-written by Howie Abrams with illustrations by Michael ‘Kaves’ McLeer, who took part in Metallica's Obey Your Master exhibition back in 2012.

A statement on the book reads: “The ABCs Of Metallica looks back at the remarkable history of heavy metal’s most celebrated group.

“Each letter of the alphabet highlights a significant moment along the band’s journey, from their humble garage days, to their numerous classic albums such as ...And Justice for All and Master Of Puppets, to biographical information on the band members themselves.

“The book is sure to entertain young readers as well as diehard fans of all ages.

“A portion of the proceeds will benefit Metallica’s All Within My Hands Foundation, which is dedicated to creating sustainable communities by supporting workforce education, the fight against hunger, and other critical local services.”

The ABCs Of Metallica is set to be published on November 26 and is available to pre-order, either as a standalone book or with two t-shirt designs through the band's website or via Amazon.

Metallica are currently on the latest European leg of their globe-spanning WorldWired tour.